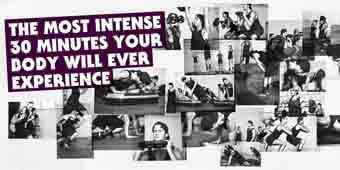 Since first being launched in 2012, Les Mills GRIT™ has become the fastest growing program for group exercise provider Les Mills, both regionally and globally.

Tapping into the micro-gym market trend and time-poor exercisers' demands for high-intensity interval training (HIIT), clubs and facilities all over Australia are finding opportunities to give their members the benefits of 30-minute long HIIT programming using GRIT Series in both small group and studio fitness.

In the USA, 24 Hour Fitness will be adding the program at more than 200 locations as of December while locally GRIT is now being run in 369 facilities across Australia.

The YMCA has introduced its new small group personal training program, the Les Mills Grit Series, at many of its facilities while Belgravia Leisure also operates the program at its managed centres.

Officially opened in January this year, the Belgravia-managed Splash Devonport Aquatic and Leisure Centre actively highlights GRIT in its promotional material while at the Windy Hill Fitness Centre in Essendon, GRIT STRENGTH and GRIT CARDIO were introduced in October.

"Les Mills can confidently say we are advancing our mission to create a fitter planet."