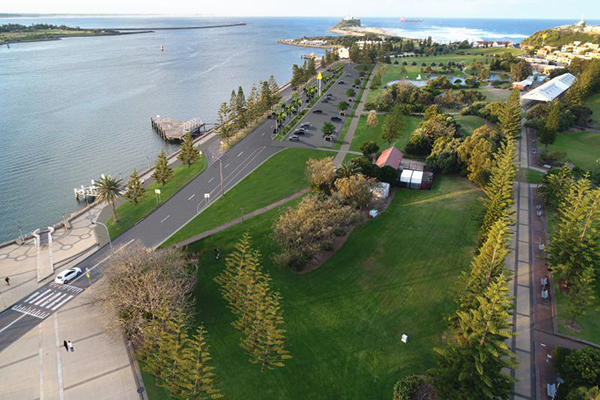 The City of Newcastle is 75% of the way towards its goal of creating a greener public space within the Foreshore precinct whereby it aims to deliver 7,000 metres2 of additional shade.

The City began a four-year tree replacement program in Foreshore Park during 2017 as part of its preparations for the inaugural Newcastle 500 Supercars event.

Since then, City of Newcastle has planted 51 advanced trees, including 10 Kentia palms and 41 Norfolk Island pines, as part of its target to increase the amount of shaded canopy in the popular East End park from 2,800 metres2 to 9,800 metres2.

The tree plantings to date have been located around the perimeter of the park, strengthening the boundaries of the space and reinforcing the avenue plantings at Wharf Road.

Newcastle Lord Mayor Nuatali Nelmes said that although there will be some replacement planting occurring with advanced trees in the nursey now ready, the majority of the remaining plantings would be completed in conjunction with the Harbour Foreshore Precinct Masterplan, which has recently finished its first phase of community engagement.

Lord Mayor Nelmes notes “this is a generational opportunity to reimagine one of the City’s premier parks to suit the needs of a growing community following extensive community engagement.

“The masterplan process will look at the current functions and management of the park and how they might be better utilised now and into the future.

“Early feedback has highlighted the significance of the Foreshore’s environment to the community, with 70% of those surveyed nominating tree planting as the most important natural element of the Foreshore masterplan.

“We are proud of the work that has been completed to date at Foreshore Park, with the new tree plantings offering significantly more shade cover than was previously available.

“The remaining trees and shrubs required to achieve the commitment for canopy increase will be placed in accordance with a community-endorsed masterplan.

“These new plantings will help with the integration of nature and the built environment and strengthen the character and use of the park, while significantly contributing to the City’s biodiversity and environmental need.”

City of Newcastle and the masterplan consultants will work closely with stakeholders to achieve the desired character for the Harbour Foreshore and prepare a masterplan that will produce the targeted canopy cover for the site.

The first meeting of the newly formed Harbour Foreshore Community Reference Group was held recently to discuss future directions for the concept designs.