The Confederation of Australian Motor Sports has advised that with motor sport in Australia is experiencing unprecedented levels of growth in licence holders, permitted events and clubs, there is an increasing demand for greater access to motor sport facilities across the country.

Victoria
In Victoria, the City of Ballarat recently passed a proposal document outlining the business case of a motor sport facility within the region. It was endorsed with unanimous support from Councillors and the motor sport community.

CAMS Chief Executive Eugene Arocca explains “it is our view that Victoria is screaming out for another world class track and with established tracks in both the north and south, the logical place for our next track is the west.”

“We have been actively working with the Council on this concept for some time and the last two years has seen a major step forward in the development of the motor sport and industry hub in Ballarat.”

With territory elections due in August, both Country Liberal and Labor parties have allocated funding to upgrade existing infrastructure for a range of motor sport facilities and initiatives.

Arocca advised “having advocated motor sport to the Northern Territory Government for the last couple of years, it is encouraging that we are seeing real progress with the way government - not just in the Territory but across Australia - is getting behind both professional and club level motor sport.”

Supercars recently confirmed a deal that will ensure racing at Hidden Valley until 2030, with a potential night race from 2018.

Arocca added “motor racing at night would be an amazing spectacle, and undoubtedly make for excellent television.

“Hopefully, night time racing will inspire even more Australians to participate in our sport, and possibly trigger other state governments to look at investing further in grass roots motor sport.”

Queensland
While new facilities are exciting propositions, the curation and upgrade of existing facilities is of equal importance.

Ipswich’s Queensland Raceway is due to embark on a major redevelopment, which is to be lead by former Supercars director and Tailem Bend commercial manager Damien White.

Deputy Mayor Tully advised “the precinct has the unique advantage of being established within a buffer zone away from high density residential areas and is well positioned to major freight transport links.

“Redeveloping the Ipswich Motorsport Precinct will bring significant economic benefits to Ipswich and create up to 200 construction jobs for the local community. It is anticipated to generate more than $138 million of bene ts per annum.

“When fully developed we can expect the total investment at the precinct to exceed $220 million.” 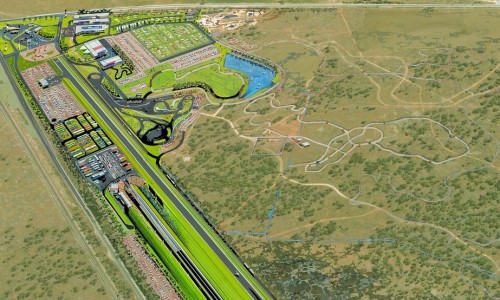 Developed by local South Australian company Peregrine Corporation, the facility is currently under construction and is anticipated to be completed in 2017.

The venue will cater for a variety of disciplines including circuit racing, drag racing, drifting, karting, rally and rallycross.

Summary
With 75,422 affiliated car club members in Australia, CAMS remains in constant dialogue with government across all levels to advocate for greater investment in the sport to cater for our large club level membership base.

Arocca concludes “every single one of those 75,422 affiliated car club members are part of the CAMS community

“We are at the centre of a huge, $2.7 billion industry, and CAMS’ continued growth allows us to broaden our role in government advocacy and engagement, ensuring that motor sport receives recognition for the major contribution it makes to the Australian economy.

“It is for every one of these members that CAMS continues to work hard to achieve our mission - to have more people enjoying more motor sport.”

First published in the August edition of Speed Read.

Images: Plans for Ipswich’s Queensland Raceway (top) and an artist's impression of the planned SA Motorsport Park (below)