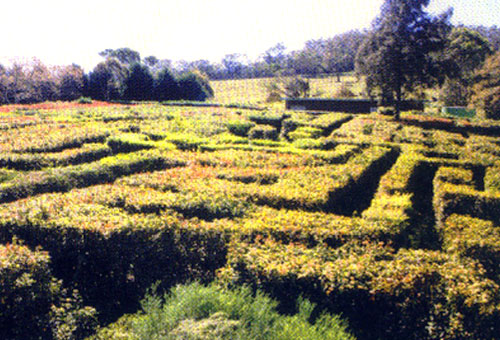 After over 25 years of planning and 'growth', the planned Granties Maze attraction at Gerringong on the NSW South Coast may finally be opening in October.

Located on the Princes Highway at Foxground, 7 kilometres west of Gerringong, the maze is 100 metres long x 50 metres wide. Planted back in 1985 when Grant first conceived of his planned attraction, the maze is now mature and ready for visitors.

However, for most of those 25 years John Grant has been in conflict with Kiama Municipal Council and NSW Government roads agencies over access to and the development of the attraction.

Grant received approval for his most recent plans in 2005, but difficulties in meeting the 400 conditions placed on it have delayed the opening.

Most recently, having planted thousands of trees on the site, opening of the attraction was delayed over the removal of seven trees required for access from the Princes Highway.

Kiama Council General Manager Michael Forsyth recently told local media that while the Cuncil supported the development of new facilities and attractions in the Kiama area, conditions from the 2005 approval still needed attention.

He explained "one of the principal ones relates to the provision of safe access/egress from the Princes Highway.

"The standard of access has been determined by the Roads and Maritime Services and needs to be installed prior to commencement of works on-site. This has not occurred at this time."

However, recent site meetings with Council and Roads and Maritime Services officials appear to have resolved outstanding issues and now John Grant is confident that his maze attraction, one of a growing number of mazes in Australia, will open in time for the next NSW school holidays.

For more information go to www.grantiesmaze.com.au