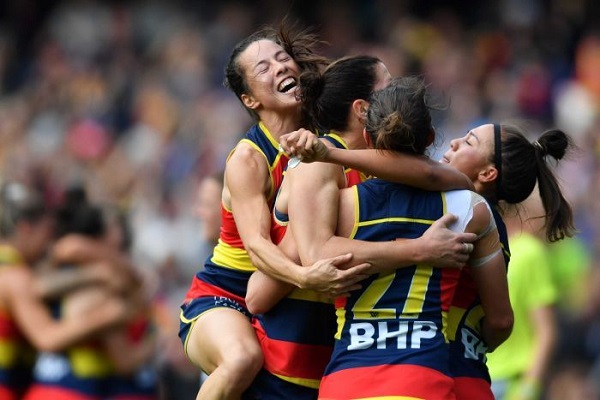 A dominant display on the field by the Adelaide Crows wasn’t the only success story from the weekend's AFLW grand final, with crowd figures setting a new attendance record for a domestic women’s sport game in Australia.

A 53,034 strong crowd attended Adelaide Oval on Sunday to watch the Crows take the club’s second AFLW premiership in three years with a dominant victory over Carlton.

The previous record stood at 41,975 from Fremantle’s clash with Collingwood at Perth’s Optus stadium last year.

The AFL’s goal of attracting 30,000 fans through the gates was blown out the window, with the public making a statement of support for the game.

The record-breaking attendance figure has confirmed the recent report by Roy Morgans Research, attributing the national uptake in sports participation by females to the success of the AFLW.

The continued growth and success of the AFLW will place pressure on AFL headquarters to extend the season beyond seven weeks and discuss the idea of a joint collective bargaining agreement, which would see the fully professional men’s players help subsidise AFLW to fast-track the players’ transition to full-time athletes.

Amid frustration over the length of the season, this year, AFLW needed just two extra weeks to ensure a fair fixture in which teams played each other once. This would also have negated the need for a conference system which saw sides as dominant as the Kangaroos (five wins, two losses) miss out on finals despite finishing with a better record than Carlton.

Despite the unpopular system, AFL headquarters is likely to continue the structure into next year, with AFL Head of Women’s Football Nicole Livingstone advising it would continue given AFLW's limited "window" and "cost".

Images shows the Adelaide Crows after their AFLW grand final win at the weekend.