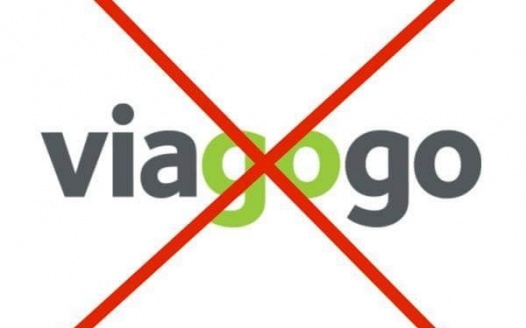 Consumer advocates have accused Google of being "complicit" in the controversial tactics used by some ticket resellers to allegedly dupe Australians ticket buyers into paying high fees entertainment and sport events.

Australian consumer group Choice, along with partner organisation Consumer NZ, has called on the internet search giant to stop accepting payments from ticket reselling companies that sees them placed at the top of internet ticket searches – generally above the official ticket sellers.

Earlier this week, the Australian Competition and Consumer Commission (ACCC) announced it was taking ticket reseller Viagogo to court for allegedly engaging in misleading and deceptive conduct.

The Swiss-based company, which also operates in the US, Europe and New Zealand, describes itself as an online ticket marketplace that allows consumers to buy and sell tickets to sporting events, concerts, and plays.

They found that 79% of complainants mistakenly believed they were purchasing tickets from the official seller.

Choice spokesperson Tom Godfrey explained “once you land on a resale site, you don't really stand a chance with resellers using tricky tactics such as disguising buttons to look similar to authorised sellers or making 'official' claims.

"Search engines such as Google are complicit in the confusion because they allow resale websites to place paid links above official sites in search results."

On 29th August - a day after the ACCC launched proceedings against Viagogo — the top Google search results for ‘Ed Sheeran tickets’ and ‘Ashes tickets’ were ads for Viagogo.

Godfrey added “clearly Google has a lot of work to do.

"As you go through these sites, claims that these resellers are the official site, claims that they offer consumer protection, lead consumers to believe that everything is okay, and it just isn't." 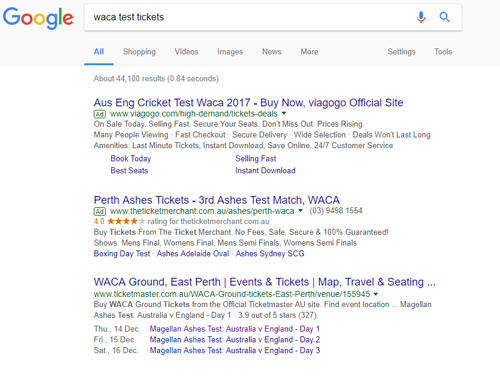 The internet giant's advertising policy states that Google does not "allow ads or destinations that intend to deceive users by excluding relevant information or giving misleading information about products, services, or businesses".

Google also states that it bars advertisers which promise "products, services, or promotional offers that aren't easily found from the landing page".

A Google spokeswoman told the ABC that the internet giant did not comment on individual advertisers, advising in a statement “to make sure that ads are safe and appropriate for everyone, all ads go through an approval process using the AdWords advertising policies.

"Users can lodge complaints if they believe an advertiser breaches these policies and all complaints are investigated. Ads that violate our terms and conditions we will be removed."

Choice said the internet has given ticket resellers an air of legitimacy, but consumers still need to be vigilant, with Godfrey adding “if you saw these sellers in front of the venue there's no way you'd approach them and buy a ticket.

"What we're seeing is widespread fraud through this industry. We'd like to see a crackdown on misleading online advertising.

"The promoters, the venues and the ticketing companies need to be more transparent about the number of seats and tickets available.

"That way consumers can legitimately on-sell tickets without fear of being ripped off."

A petition to have Viagogo removed from Google can be found at www.ipetitions.com/petition/to-have-viagogo-removed-from-google