Goodlife Health Clubs’ opening of its latest gym in Melbourne’s Docklands at the beginning of March marked the chain’s first city-based club in the competitive fitness club market in the Victorian capital.

The opening coincided with owner Ardent Leisure announcing that it is undertaking a review of strategic options in gyms amid speculation that the move might precipitate the business being put up for sale.

Other options from the review might include further acquisitions or strategic partnerships.

Located on the concourse of Etihad Stadium (opposite Gate 2) in the heart of Medibank Place, the new 24/7 Goodlife club has, according to a Goodlife statement, been “designed with Melbourne city dwellers and commuters in mind, featuring several elements that are a first for the national fitness brand.

The architecturally-designed club was built around the concept of bringing the outdoors in with natural timber, polished concrete and plant walls creating a bright, fresh feel.

Goodlife Health Clubs Head of Fitness Lance Williams said Goodlife Docklands will cater to corporates, commuters and inner-city residents, 24 hours a day, seven days a week, stating “whether you want to try small group or functional training, TRX, yoga, barre or other mind/body classes, or even complement your regime with HYPOXI, Docklands will be a one-stop location for all your fitness needs. 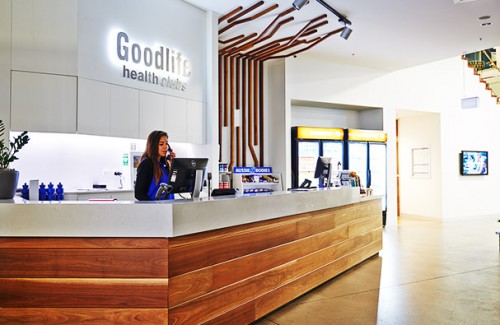 The new club has been designed to maximise floor space and decrease the often cluttered feeling of gyms, while keeping the 24/7 lifestyle of Melbourne residents in mind.

Williams added “our multi-purpose group fitness area and spin studios are available for members to use when classes aren’t running, giving gym goers more access and training options than ever before.

“Being a 24/7 gym, members will also be able to try a virtual class at any time of the day or night, while keen cyclists can BYO bike and train indoors using our wind trainers when the weather is too unpredictable.”

Goodlife Health Clubs National Property Manager Ashley Rowe said that the decision to give the club a light, fresh feel came off the back of seeing an opportunity to compliment the aesthetics of the Medibank building and, essentially, bring the outdoors in.

Rowe stated “we’re excited to reveal the spacious and open nature of the club, which uses natural materials and light wherever possible.

“A key feature of the club is the 5 kilometres of recycled Queensland Spotted Gum used in the ceilings, floor and privacy screens, as well as a green wall and planter boxes throughout.

“It really is Goodlife like you’ve never seen it before.”

Having experienced a challenging first half of 2015, Goodlife recorded a 5% net growth in members between July 2015 and January 2016. 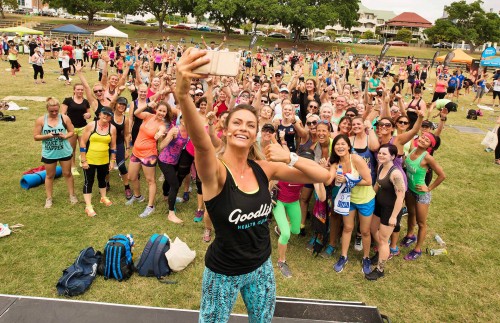 With Goodlife introducing 24/7 operation to  many of its clubs, Teeger added “we attribute the growth in member numbers to the 24/7 strategy, sharper introductory pricing and the success of Goodlife’s sales team in upselling customers to premium memberships to maintain yield - 45% of new members purchasing premium memberships.”

Goodlife plans to have a minimum of 45 of its clubs operating as 24/7 gyms by the end of the current financial year.

Images (from top): Funcional training area at the new Goodlife Docklands, the club has a light, fresh feel and Goodlife partner Emily Skye at a pre-launch event for the new club.