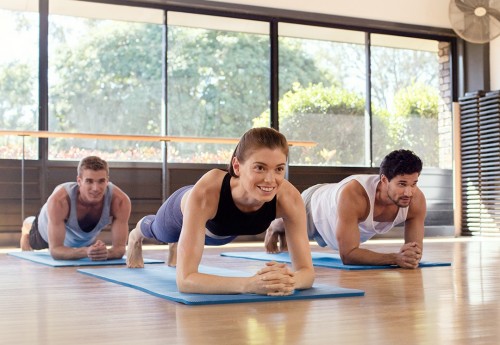 Boasting one of the most extensive and accessible group fitness timetables of any health club in the country, including 11 different formats and over 750 weekly classes nationwide, the campaign is designed to encourage more Australians to strike the right balance between life, work and exercise routines.

Goodlife Health Clubs Head of Marketing Jay Baikie said the increasing awareness of the benefits of yoga and Pilates had seen many club’s double and in some cases triple the number of MIND BODY classes on offer.

Baikie explained “with the rapid rise of the industry here in Australia and around the world, and a greater desire for work-life balance, it’s no surprise that we’re seeing consumer demand for classes at an all-time high.

"Goodlife Health Clubs has, and is, continuing to experience a considerable upward trend in class attendance - especially for yoga, Pilates and, more recently, Bootybarre - inline with this global growth.

“Our value proposition is incredibly compelling when you consider many of the boutique studios and pop-ups charge upwards of $30 per class. The campaign represents a timely reminder that as a Goodlife member, you have unlimited access to MIND BODY classes as well as strength and cardio training options - all included in your membership.”

The campaign launched with a 30 second teaser trailer and will be promoted over a three week period with paid activity across Facebook, Instagram and SEM, as well as owned social media assets, in club and via Goodlife’s brand channel on music streaming app Guvera.

Building on the popularity of its MIND BODY classes, Goodlife Health Clubs will also launch its first dedicated MIND BODY studio at Goodlife Ashgrove in Brisbane, which is currently undergoing a $2.5 million renovation and scheduled for completion in September. The facility will offer a range of virtual yoga programs, as well as Bootybarre, Pilates and traditional yoga classes.

For more information go to www.goodlife.com.au/mindbody