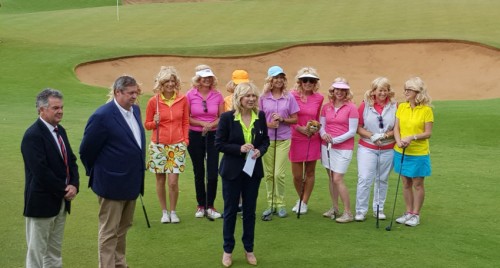 Television personality and golf fan Kerri-Anne Kennerley (and nine lookalikes) this week launched the 2018 event at the Kooyonga Golf Club.

Kennerley and her brightly dressed clones were there to send a message that golf needs an injection of fun to turnaround its fortunes and Australia’s biggest women’s tournament was a good place to start.

She explained "we want to change some of the perceptions of golf being a very conservative, middle-aged sport

“We are having fun with golf and we do need to get people onto the course with their kids, with their families to enjoy the brilliant sport that we know it is.”

The 15th to 18th February Kooyonga Golf Club event will be the third consecutive year Adelaide has hosted the tournament following successful weeks at nearby courses The Grange and Royal Adelaide in 2016 and 2017.

Golf Australia Chief Executive Stephen Pitt said 2017 had been an amazing year for women’s sport in Australia and golf wanted to share in that success.

Pitt stated "we’ve seen the profile of elite women’s sport go through the roof and we’ve seen some really exciting innovations in women’s sport – the women’s AFL competition has been really strong, the Matildas and our Australian women’s cricket team have been real highlights over the past 12 months.

“The ISPS Handa Australian Women’s Open from our perspective has been a great event for a long period of time, it’s always hosted the best players in the world and we’ve had a very fortunate occurrence where the prize money for our top female players is actually higher than the prize money in the men’s Australian Open.

“I think that’s a really strong achievement and a signal of how much we want women’s golf to succeed in this country.”

Pitt said Golf Australia had a strong belief in the need to grow women’s golf in Australia and there had been a lot of work being done to make this happen such as its Vision 2025.

“Back in the ’70s, 34% of all golf club membership was female in this country but gradually that’s dropped away to about 20% and we want to get it back up to where it needs to be.

“I think that needs to be a joint effort but we do see this event as being a cornerstone to achieving that.”

The presence of big names in women golf including Laura Davies, Michelle Wie, Karrie Webb, Lydia Ko and Jang attracted massive crowds to Royal Adelaide and global television coverage this year and led to the tournament being crowned Sport SA’s 2017 major event of the year.

Golf Australia will be hoping similar success in 2018 will not only get the turnstiles ticking but eventually result in more women playing.