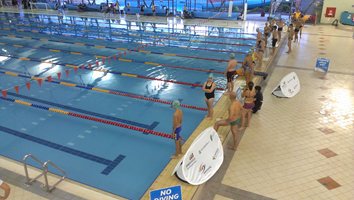 Energy efficiency measures at the Goldfields Oasis aquatic and recreation centre in Kalgoorlie have been commended by Western Australian Environment Minister Albert Jacob.

Minister Jacob has marked the successful completion of Goldfields Oasis' energy efficient swimming pools project and unveiled a screen that provides a live feed of the cost and energy savings.

The Oasis' two swimming pools are being heated using a combination of solar energy and ground source heat pumps.

Minister Jacob explained “the benefits of this energy efficient heating is significant, with 8,400 tonnes of carbon dioxide expected to be saved over the life of the project, which is equivalent to growing 50,000 Australian native trees.

“The ground source heat pumps alone will reduce the City of Kalgoorlie-Boulder’s gas consumption by about 4,000 gigajoules of gas each year, equivalent to the gas that 383 West Australian homes use each year. It will also result in savings of approximately $83,000 each year.”

The Western Australian Government provided $533,790 for the project through the Low Emissions Energy Development fund which supports the development of new, low emission technologies.

Energy Minister Mike Nahan added that  the project was part of the City of Kalgoorlie-Boulder’s initiative to replace most of the recreation centre’s gas consumption with low emissions and renewable energy.

Minister Nahan stated “by reducing gas consumption, this project will free up capacity for other users of the Goldfields gas pipeline.

“WA has abundant renewable energy resources and the technologies to utilise these are now maturing.”

Dr Nahan said the energy efficient ground source heat pumps drew heat from below the ground and formed the third component of the project, after the installation last year of solar thermal and photovoltaic panels.

Following the City of Kalgoorlie-Boulder's lead, similar technologies are now being implemented at other community pools in Western Australia.