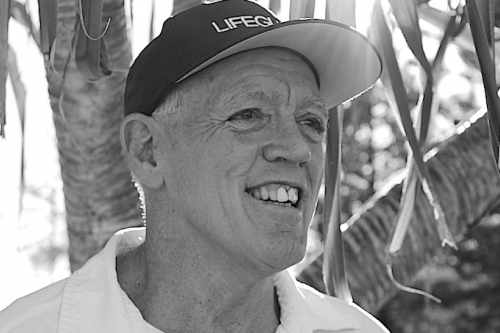 The Board of Directors of Gold Coast Tourism has recognised Warren Young with Honorary Life Member Award for his longstanding contribution to the tourism industry.

The Gold Coast’s Chief Lifeguard accepted the accolade at Gold Coast Tourism’s recent Annual General Meeting in recognition of his contribution to the industry which spans 44 years watching over one of Australia’s best known stretches of beach.

The Board, on behalf of Gold Coast Tourism (GCT) voted unanimously to award the Young in recognition of his contribution to the industry which spans 44 years ensuring safety on the area’s beaches.

When he began his career in the 1970s, Young, initially stationed at Burleigh, was one of only a handful of council lifeguards patrolling the region’s beaches before being promoted to the top job two years later.

Gold Coast Tourism Chief Executive Martin Winter sees that Young’s passion for guardianship and his unwavering dedication to educating the community about respecting one of the region’s greatest natural assets is why he’s an “iconic” Gold Coast figure and personality.

Winter states “Warren is an industry pioneer and continues to be paramount in shaping safety associated with our coastal culture and the undeniable affinity that locals and visitors have with our famed beaches.

“Mr Young is unapologetically passionate; his passion that stems from childhood, which ultimately landed him a dream job and illustrious career as a professional lifeguard. He’s a familiar face and voice on TV and radio and generations of beachgoers have grown up under his guardianship.

“Warren Young was instrumental in establishing beach safety, pushing the need for increasing beach patrols and the implementation of elevated lifeguard towers which became a fixture on millions of postcards and now Instagram accounts promoting the Gold Coast to the world.”

Young said that he was honoured to receive an award that he believes stems from non-other than a love for our beaches and keeping beachgoers safe.

He explained “it’s believing in what we were doing, often we look for a quick fix which doesn’t work but the City of Gold Coast believed in me. It was a commitment by staff and by council who saw a worthwhile investment in our future.

“There are all sorts of innovation from jet skis to boats and drones but you can never replace a person to read the water, the situation and the people in it.

“No one presses a button except him or her (the lifeguard) who knows what’s going on.”

Four decades ago beach safety was in its infancy and Young was instrumental in creating a groundbreaking and multi-generational movement asking us to swim between the flags. He has witnessed skyrocketing visitation over the years and our beaches have been one of the primary attractions but warns we mustn’t become complacent when it comes to the dangers.

He adds “beach signage is important but it can be problematic for those hailing from non-English speaking backgrounds, so we need to be more mindful and culturally aware to ensure we can all enjoy our beaches safely.

“Nothing replaces the guardian, lifeguards watching people is our best plan. Secondly education and teaching people to swim via programs is crucial followed by signage, but our priority must always be on guardianship.”

Each year the Gold Coast Tourism Board of Directors nominate and consider potential recipients based on certain guidelines, including years of service in the industry, contribution and value to the industry above and beyond private interests or their employer and/or selfless service to GCT Corporation.