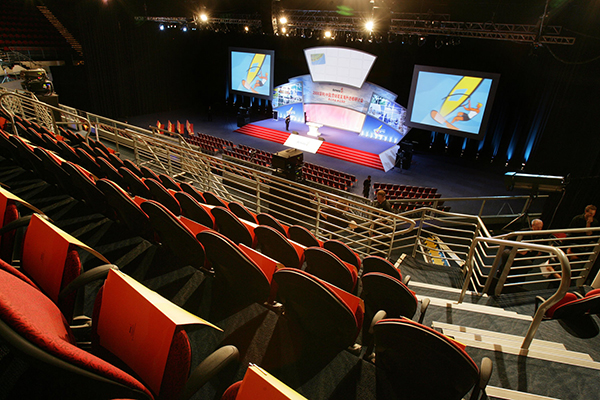 As part of its ongoing equipment life cycle management, the Gold Coast Convention and Exhibition Centre (GCCEC) has spent the last two years preparing and then rolling out changes and updates to all of its existing radio microphone and RF management equipment. After evaluating options through their supplier Brisbane Sound Group, and with technical advice and guidance from Jands, GCCEC has deployed Shure Axient Digital radio microphone systems throughout the facility.

Jands, an Australian owned and proudly independent company founded in 1970, distributes some of the world’s leading Audio, Lighting and Staging brands for the installation, production and retail industries throughout Australia and New Zealand. While Shure, founded in 1925, is a leading global manufacturer of audio equipment such as microphones, wireless microphone systems, in-ear monitors, earphones and headphones, conferencing systems, and more.

GCCEC has event spaces including a main arena with capacity for 6,000, four exhibition halls, and 22 meeting rooms - the Centre hosts everything from major sporting events, to professional conferences, to small corporate meetings. It’s a major user of radio microphones, which might be called on for anything from a PowerPoint presentation for six, to the Eurovision 2019 Australia Decides contest, which it hosted in February 2019.

With the Centre being a high-profile, high-density user, and the background RF environment of the Gold Coast notoriously difficult, it needed an RF solution that was robust, reliable, and delivered the finest audio.

“The first was to replace all of our roving, roadcased radio mic racks, and the second was to replace the site-wide radio mic system we use to cover the facility as a whole, including its spectrum management and networked audio distribution.”

Josiah Kerridge, Sales Specialist at Brisbane Sound Group added “with the Centre needing to upgrade RF through the whole building, the high channel count, and the Gold Coast’s spectrum background, we felt that Shure Axient Digital was the only option.

“We helped organise A/B testing against the incumbent radio mic brand, and the GCCEC staff decided that Shure Axient Digital represented a step above in both RF and sound quality. They ran a very thorough evaluation of all mic capsule options for the handheld transmitters and lapel mics for the bodypacks, which included the new Shure TwinPlex subminiature lavalier, which they’ve adopted as a premium option.”

Racks
The GCCEC has seven roving radio mic racks that are self-contained systems with four channels. Each rack consists of two handheld and two bodypack transmitters, mics, receiver, aerials, and network connectivity. All seven of these racks are now fitted with an AD4Q 4-channel receiver, two AX2 and two AD2 handheld transmitters with SM58 mic capsules, two ADX1 and two AD1 bodypack transmitters paired with TwinPlex lavaliers, two UA874WB active directional antennas, an SBRC battery charger, and AD610 ShowLink access point, which gives technicians the ability to make changes to gain, sensitivity and other parameters on the transmitters wirelessly, in real time. Six of these racks have the Dante outputs pre-routed to specific digital mixing consoles.

Centralised Scanner and Mic System
At the heart of GCCEC’s radio mic system are two channels of ADX2 handheld transmitters designated as roving mics to cover the vast arena and exhibition hall spaces. Four UA860SWB wideband antennas have been positioned around the building, and an AD4D receiver patched to a centralised building-wide matrix system runs in Quadversity mode, extending the coverage zone without the risk of multipath interference. Two AD610 ShowLink access points keep the mics in range for wireless management, and at the centre of it all, an AXT600 Axient Spectrum Manager continuously scans the entire GCCEC, and automatically manages frequency and interference issues not just for the two roving ADX2s, but for the mics and receivers in every roving rack. All systems are networked, and a central computer running Shure’s Wireless Workbench software sends a live scan to a screen in the AV storeroom that keeps techs updated on all RF activity in the building.

Angel advises “The AXT600 Axient Spectrum Manager is the brain of our system. It is continuously scanning the building and can assign frequencies to any Shure wireless equipment we’ve connected to our AV network. It takes the hard work out of managing RF and is almost totally automated. We don’t need to constantly create new frequency plots when we get external parties like the media bringing in radios mics.

“We can make a plot in advance, and if anything is omitted or wrong, Axient Digital works around it. It’s always current and taking into account what’s in the space. When we have someone like media come into the building that hasn’t let us know they’re using RF and what frequency they’re on, it manages it by itself.”

Delivery
Kerridge notes “the whole project has been completely stress-free. Even with the large scale and high channel count, Shure Axient Digital has been simple and reliable to deploy. The support from Jands has been great, and I think that Shure are the market leader in spectrum management – Wireless Workbench and the AXT600 just make sense.

Angel concludes “we’ve had great support and buy-in for Shure Axient Digital from our technical staff. Our roving racks are aesthetically pleasing, with a clean look and simple set-up and pack down. We now have the ability to fix issues even when we’re not in the room. Our staff know Shure Axient Digital is the best-in-class, and techs are always happy when they work with the best gear.”

For more information on Shure go to www.shure.com

Image shows the interior of the Gold Coast Convention and Exhibition Centre.