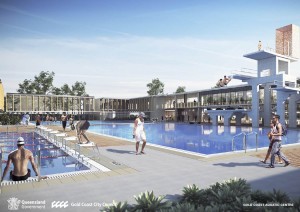 Construction of the new $41 million Gold Coast Aquatic Centre redevelopment is underway this week with Queensland Minister for the Commonwealth Games Jann Stuckey and Gold Coast Mayor Tom Tate on hand to witness the turning of the first sod for the new 50 metre competition pool.

The existing Aquatic Centre is making way for a new world class facility that will host the 2014 Pan Pacific Swimming Championships before becoming the venue for the swimming and diving competition for the Gold Coast 2018 Commonwealth Games.

Minister Stuckey said the occasion was a major milestone for the Gold Coast 2018 Commonwealth Games preparations and for the host city, stating "by moving construction of the aquatic centre forward, we will be able to take advantage of opportunities to host other events like the Pan Pacs, ahead of the Commonwealth Games, to ensure we maximise the return on our investment.

"The aquatic centre will be a great legacy project that will deliver significant economic and community benefits well beyond the Commonwealth Games.

"There are a lot of other things happening in the Commonwealth Games space this year, with planning for the Carrara Sports Precinct and early works for the Games Village at Parklands.

"One of the biggest milestones will be the launch of the Gold Coast 2018 Commonwealth Games brand and emblem, which I can guarantee will set a great platform for a great event."

Mayor Tom Tate said elite sport and the local community were excited about the pool upgrade, adding "our community can look forward to watching the new aquatic centre take shape quickly and reopened approximately two years ahead of schedule.

"I've had a chance to talk to our local groups and elite level swimmers from around the country during the recent Swimming Australia national training camp and the message has been the same they can't wait for this new facility.

"The new Gold Coast Aquatic Centre will be able to cater to almost double the current pool patronage and both elite and local groups have said it will be well used."

The project costs are being split evenly between the City of Gold Coast and the Queensland Government and delivered by Watpac Construction, the builder behind Queensland sporting landmarks including The Gabba, Suncorp Stadium and Metricon Stadium.

Construction works for the aquatic centre redevelopment are expected to be completed by mid-2014.