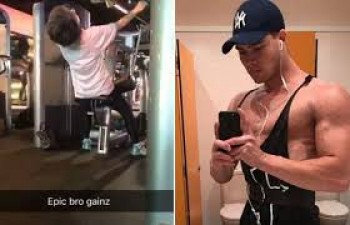 Leading Queensland fitness group GO Health Clubs has banned one of its members for life after he shared a video via social media of himself mocking an elderly woman attempting to use gym equipment.

Bodybuilder Conor Tisdell uploaded the clip yesterday (Wednesday 28th December), with the grammatically-challenged caption “Epic bro gainz”, later saying that the lady must be “practicing her new dance move” in the comments below.

Furious members of the public objected to the androgynous Brisbane muscleman’s Instagram post of his fellow gymgoer using the pull-down machine.

However, Tisdell will now have to find a new place to practise his moves - after GO Health Clubs told Daily Mail Australia his membership had been terminated.

Media reports also indicated that another victim of Tisdell’s shaming had noticed he was laughing at her when she was attempting to do a squat under the guidance of her personal trainer.

The woman told the Daily Mail “it's disgusting, he's starting an ongoing trend to publicly shame and embarrass people.”

A gym staff member member seemingly endorsed Tisdell's shaming, commenting “aw when you know who the member is”, on the Instagram post.

The unfortunate incident comes at a time of year when many people consider joining gyms to achieve fitness goals.

It also follows an incident in the USA earlier this year when Playboy model Dani Mathers posted a photogrpah of a naked, 70-year-old woman in a gym locker room and posting it on Snapchat.

Last week, Mathers pleaded not guilty to invasion of privacy in a Los Angeles court while her defense attorney said Mathers “very much regrets” what happened.