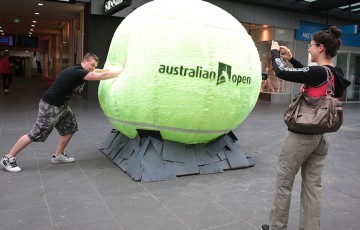 To mark the launch of the 2015 Australian Open, giant tennis balls appeared across the Melbourne CBD yesterday (7th October), with tickets now available for the event at Melbourne Park, which runs from Monday 19th January 2015.

The arrival of the bright yellow balls kick-starts the countdown to the first Grand Slam of the year, with tennis fans encouraged to post selfies with the giant tennis balls or the Australian Open tram on Instagram and Twitter, with 100 ground passes on offer to the best entries using @AustralianOpen and/or #GetCourtUp.

Initiatives for Australian Open 2015 include:

Speaking at the Australian Open launch, Tennis Australia Chief Executive Craig Tiley stated "we are determined to continually push ourselves to new heights in terms of facilities, service and the overall experience for players and fans.

"We want to make the Happy Slam even happier."