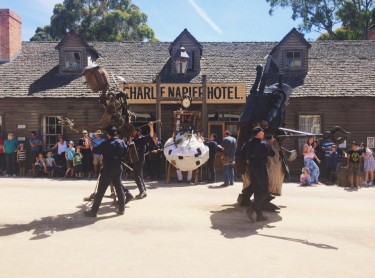 Ballarat attraction Sovereign Hill has introduced a group of giant puppets that will roam outdoor museum through the summer.

The giant puppets of the Majestic Mythical Marvels were created by Scott Wright, Artistic Director of the Erth visual consultancy, a native of Ballarat.

Growing up in Ballarat Scott Wright developed an interest in puppets going on to found Erth while still living in Ballarat, before the now internationally successful company relocated to Sydney.

Now Wright has created three 'automata' – 19th century style mechanical robots and a story that links with the heritage attraction.

The story goes that a human character called Tinker - who works during the day to repair things - is fascinated by the industrial revolution.

By night, Tinker decides to create the automata that inhabit various locations around Sovereign Hill.

Wright says it's important for puppet characters to have a backstory and to interact with visitors, telling the ABC “because it makes them more than just an object in the landscape."

Wright says that as the skills of the puppeteers grow over the summer, the characters will further develop and mature, adding “at the moment they're like babies and they're learning their environment, but eventually they're going to rule."

The huge puppets are over three metres high and require several people to manoeuvre them. They've been specifically designed to blend in with the surrounding environment.

Majestic Mythical Marvels is showing at Sovereign Hill from the 26th of December till the 26th of January.

Sovereign Hill is located in the Ballarat suburb of Golden Point, recreating the city's first 10 years after the discovery of gold there in 1851.

Erth have built an Australia wide, and increasingly international reputation based on exceptional work. In demand for events and festivals, the Company inspires audiences with their unique and dynamic vision.

For more information on Sovereign Hill go to www.sovereignhill.com.au

For more information on Erth go to www.erth.com.au