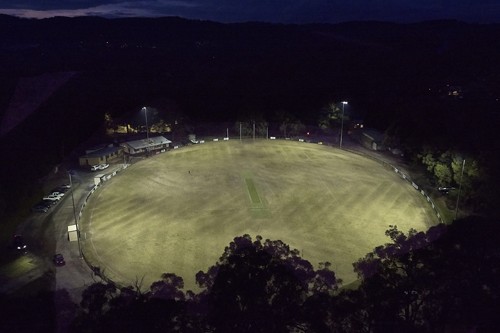 Gerard Lighting Group has shared its experience in introducing an innovative lighting technology, never-before used on a community sports oval, which will save 70% on energy bills and provide a bright space for participants to enjoy.

More than a sporting field, South Belgrave Oval in the outer eastern suburbs of Melbourne is also a hub for the whole community. So, when Gerard Lighting Group was asked to provide a contemporary lighting solution for the sportsfield, it chose to install Sylvania Briteline™ LED Raptor floodlights.

However, initially the company encountered some resistance to the use of LED lights, due to perceived high installation costs and lack of proven performance.

Undeterred, the Yarra Ranges Shire Council and the South Belgrave Football Club worked together to find the evidence, which demonstrated the benefits of the technology and the massive cost savings that would be achieved with LED oval lighting.

South Belgrave Oval is one of the pioneering community football clubs to take up the LED technology at its emergence by installing LED floodlighting on an AFL oval.

This LED installation will be used throughout the entire oval which is home to AFL players ranging from four to ten years in the Auskick group, juniors, seniors, all the way up to the veteran players of 35 years old and above.

The South Belgrave Cricket Club component of the oval caters for three senior, veteran and junior sides, and with the introduction of AFL Womens competitions, there is a high demand on access to more sporting ovals. 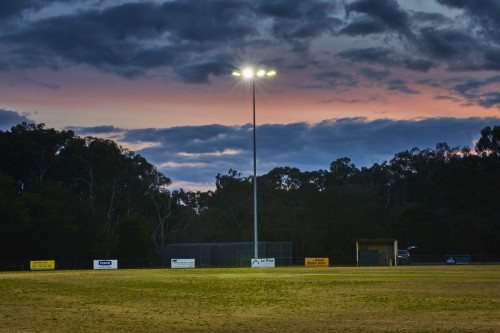 The quality and performance of Sylvania Briteline™ LED Raptor floodlights, allows South Belgrave and the overall community to reap the benefits of the additional access to this oval.

Ian Bakens, Development Coordinator for the Belgrave South Sporting Precinct explains “the new Sylvania Briteline™ LED Raptor floodlights will more than pay for themselves in a very short period of time with the reduced energy and maintenance costs.

“What excites us most is that we can now provide our players, their supporters and everyone who enjoys the South Belgrave Oval a state-of-the-art playing field.”

The installation of Sylvania Briteline™ LED Raptor floodlights have met a total saving of 70% on power bills and an even bigger savings in the repairs and maintenance component – this has reduced the demand on lamp replacements on traditional floodlights, which not only have financial commitments but also require the volunteers of the club to manage and facilitate the logistics to undertake the works.

The additional funds required for the oval lighting re-design, was raised through the Federal Government’s infrastructure funding program as well as local and Victorian Government fundraising initiatives.

In addition, once senior management of the Yarra Ranges Shire were convinced, and with the support of the local Councillor Mike Clarke, additional funding was granted getting them over the line and raising the extra $85,000 needed on top of $125,000 already allocated to the project. 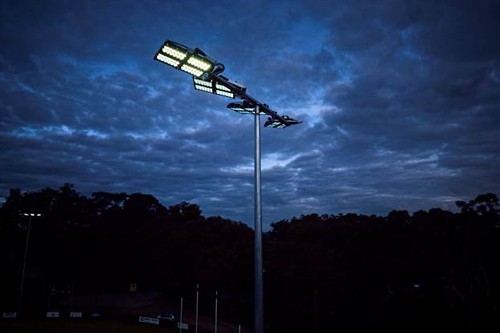 Taking only one week to fully install, the Sylvania Briteline™ LED Raptor floodlights with 50 lux and 100 lux lighting level options, have enhanced player performance and spectator experience. With precision aiming capability and minimised glare, players, officials and spectators can see the spin of the ball or other on-field action with extreme accuracy and clarity.

Bakens explains “the uniformity of the light around the whole oval surface, both at the 100 lux level and the reduced 50 lux level has been incredible.

“The pure white colour of the LED light compared with the more yellow type of light you get from metal halide light technology has made for a much more enjoyable and efficient experience for players on the field.”

The first professional AFL game was played at South Belgrave Oval on 2nd April last year and players, umpires and club fans in attendance all reacted positively to the addition of the Sylvania Briteline™ LED Raptor floodlights.

As one player explained “it’s as bright as day out there with the new lights. They don't create any shadows, allowing me to track every movement of the ball. I think they’re doing the job well.”

Operationally, the Sylvania Briteline™ LED Raptor floodlights have the capability to turn the LED lights on and off at will, whenever needed with no cooling down or warming up period. Research also suggests sports people perform better playing under whiter rather than yellow light.

“Australians love their sport, and it is especially gratifying for the entire Gerard Lighting team to enhance the sporting experience for both Australian athletes and spectators alike.”

Operating in Australia for more than 100 years and headquartered in Sydney, Gerard Lighting is well known for providing its clients with sustainable and innovative solutions for lighting, from industrial, commercial, residential and infrastructure.

With an extensive footprint across Australia and New Zealand, Gerard Lighting has a portfolio that incorporates the electrical industry’s leading brands.

Due to expanded operating hours, the benefits of the LED floodlights extend beyond the South Belgrave Oval local sports community. Local school districts can host events later in the night, where parents can watch their children, and the fire department can run night-time practices.

As Bakens concludes “the ripple effect of opportunity beyond football is huge. The local fire brigade for example, is now able to run more extensive practices and training of running out their hose reels. As something they need to do at night, South Belgrave Oval is now a space they can conduct this training.”

The installation of the LED lighting has increased desirability and raised the ovals profile in the sporting community. The South Belgrave Oval has become a leader among sports clubs, and the LED floodlights highlight their progression toward exceptionalism.

For the 2018 season, all eyes are on the South Belgrave Oval and its LED floodlights with the AFL and other clubs sending representatives to witness firsthand the effectiveness of the innovative LED lighting in sport.

Click here for further information on Gerard Lighting via their entry in the Australasian Leisure Management Supplier Directory.