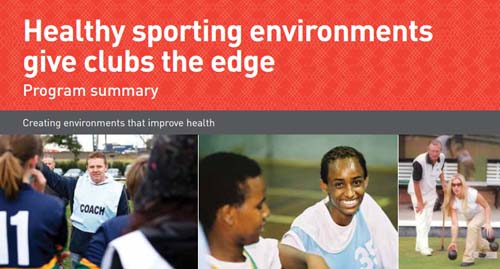 Sporting clubs in Geelong have made sweeping changes to become healthier places as part of an Australian-first VicHealth trial.

The 73 clubs in the wider Barwon region that took part in VicHealth’s $2 million Healthy Sporting Environments demonstration project in 2012 and 2013, delivered by Leisure Networks.

Clubs made changes to their facilities and culture to encourage thousands of members and players across the region to make healthier choices when it came to smoking, alcohol, choosing food, UV-exposure, injury prevention and creating an environment that is welcoming to women, Aboriginal Victorians and people from diverse backgrounds.

An evaluation of the program, by La Trobe University, shows the most significant change was in members’ behaviour around sun protection and inclusive environments, but the most challenging areas were reducing alcohol use and healthy eating.

VicHealth Chief Executive Jerril Rechter said that the clubs had shown overwhelming support for the project, with 93% agreeing their club was now a better place as a result of being involved.

“Around one in four Australians aged older than 15 are involved in organised sport or physical recreation and many more are involved as volunteers, spectators, supporters and sponsors, so the potential to reach communities with health information is significant.

“We’ve learnt a lot about what works and what doesn’t through this project and are grateful for the enthusiasm and commitment of the clubs involved to make these changes and give us feedback throughout the process.

“This program has been so well received, VicHealth has provided a further $3.3 million for 250 rural Victorian clubs to join the program. We are thrilled with the results and look forward to seeing this success replicated across Victoria.

“Another win of the program is that the club members say they think their club is a better place as a result of making healthy changes. Regardless of whether they’re taking part in VicHealth’s Healthy Sporting Environments project or not, community sport clubs can look at how they operate and make small changes to their club that will make a big difference to the community.”

• 88% of clubs said their food offering was healthier as a result of the project, with canteens now offering at least 30% ‘green’ food choices rose from 35% to more than half (57%).

• Clubs said they would offer healthier food if there is demand.

• 70% of clubs introduced eight injury prevention strategies (up from 12%).

• 87% found it easy to improve UV protection, with temporary shade and sunscreen the most popular strategies. No clubs reported not doing anything about improving sun protection.

• Almost all of the clubs introduced new policies to become more welcoming and inclusive places.

• 76% agreed that a league-wide or statewide ruling restricting tobacco use on club premises would help to reduce smoking around the club.

• Measures to reduce alcohol use were a challenge. Replacing full-strength beer with mid-strength was not considered viable and raising the price of alcohol may lead to clubs becoming more dependent on alcohol revenue – however, many clubs already had Good Sports accreditation and did not need sweeping changes to their alcohol policies.