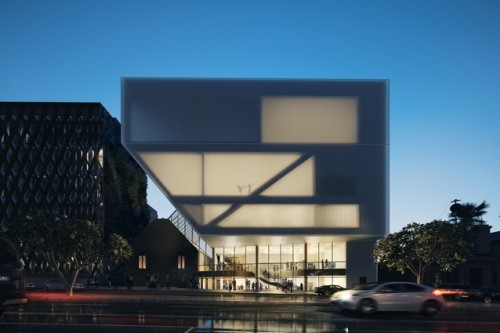 Designed by Hassell, the $38.5 million redevelopment includes a new building that will provide a new facade and entrance on Geelong’s Ryrie Street, new rehearsal facilities and dance studios, a two-storey foyer, and provision for creative industries offices.

Hassell - fresh from winning a competition to design the Western Australian Museum in Perth - have designed a translucent exterior for the 35-year-old building, which will cast the dancers using the studios on the upper floors in silhouette.

Hassell Principal and Head of Design Mark Loughnan stated “as the only stated-owned arts centre outside Melbourne, Geelong Performing Arts Centre will not only be a landmark destination it will also service the needs of the growing creative and cultural community.

“A key aspect of the facade - incorporating the elevated dance studios and creative industries - is that it’s active and alive with a translucent and sculptural form providing drama and variance from day to night.”

Loughnan said stage two of the redevelopment is an opportunity to further define the arts and cultural precinct within Geelong, adding “there was a masterplan undertaken for the wider context [of the Geelong cultural precinct] and stage two is also about creating a new identity and destination for GPAC and for Geelong.

“The project also provides a new and stronger address and two-storey entry lobby to Ryrie Street.”

The new foyer will connect the Playhouse Theatre and the Ryrie Street Presbyterian Church, which is currently used as a small performance space. The church will be visible from the Ryrie Street after years of being hidden behind the facade of the current GPAC facilities. 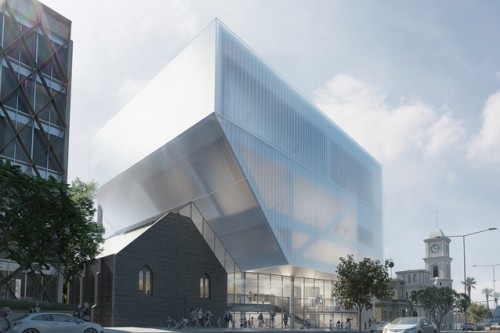 The stage two redevelopment follows the stage one refurbishment completed in 2010 - the revamp of GPAC’s 750-seat Playhouse Theatre by Studio 101 Architects. It also follows the completion of the neighbouring Geelong Library and Heritage Centre.

Loughnan said the redevelopment of GPAC was necessary to accommodate for the growing population of the Geelong region.

He explained “Geelong is evolving and it’s very important that the city is renowned for its creativity, its energy and engagement with the arts.

“The Geelong Performing Arts Centre and the cultural precinct at large are vital aspects of a diverse city, providing positive effects on the city’s attraction, as well as the community and cultural life of the entire region.”

The redevelopment and expansion of GPAC is part of the Geelong Cultural Precinct Masterplan, which began in 2003. Hassell contributed to the masterplan in 2009.

In August last year, the Victorian Government took over planning decisions in the City of Geelong with the redevelopment of GPAC is being delivered by Major Projects Victoria.

The construction of stage two is scheduled to start in the middle of next year with completion planned for late 2018.

Images: Design for stage two of the Geelong Performing Arts Centre by Hassell. Courtesy of Hassell