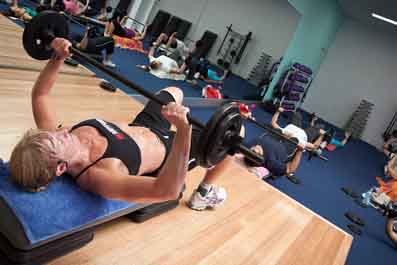 Geelong's Leisurelink aquatic and recreation centre and the Willows Health and Lifestyle Centre from Toowomba, Queensland have received the top national awards at the Australian Health and Fitness Industry Quality Awards 2013.

The Quality Awards promote and celebrate industry excellence and the work the fitness industry does in helping everyday Australians to positively change their lifestyles and improve their health.

Announcing the awards, Fitness Australia Chief Executive Lauretta Stace stated "Leisurelink ... should be justifiably proud of their achievements (as) the Prize for Excellence is the highest accolade that our industry can award to a fitness provider.

"The general standard among the entrants was very high so the Prize for Excellence demonstrates Leisurelink ... can truly claim very high standards across every area of their business, most particularly in relation to customer service."

Leisurelink has more than 10,000 members in the greater Geelong area and offers a variety of services, which include a crèche with at least 90 places per day, CPR and first aid information sessions for new parents, a 'LiveWell' program for over 55's, group personal training and a range of aquatic health programs.

The City of Greater Geelong facility has been widely acclaimed and earlier this year received the Facility Management Award at Victorian Aquatic and Recreation Industry Gala Awards.

The inaugural Prize for Advancement of Excellence was awarded to a fitness business that has previously achieved a GOLD standard and has made further significant improvements to its high quality service.

Explaining Willows Health and Lifestyle Centre receipt of the award, Stace added "this new Prize for Advancement of Excellence recognises businesses that have managed to exceed the very high standards they have previously achieved. Willows Health and Lifestyle Centre has built on its high quality service through implementing a software program that allows tracking a range of outcomes across its programs that will improve the effectiveness and quality of their work."

Willows Health and Lifestyle Centre provides a variety of services in the Toowoomba area including a gymnasium, squash courts and pool, as well as housing an Allied Health centre that includes Exercise Physiologists, Physiotherapists and Occupational Therapists.

Presented at an awards ceremony in Sydney yesterday (1st November), Fitness Australia also recognised the important contributions of industry leaders and champions through its Awards of Honour program.

With three categories of awards: the Chairman's Award; the Outstanding Contribution to the Industry Award and the Fitness Industry Roll of Honour, three new additions were made to the program last night:

Chairman's Award 2013 which recognises members of Fitness Australia's Board, Councils, Committees or Taskforces who have made a significant contribution to the work of that group and to Fitness Australia presented to Paul Kinghorn.

Outstanding Contribution to the Industry Award 2013 a award specifically created to honour the people who have made significant contributions to the development and advancement of the fitness industry in Australia - presented to Lisa Westlake.