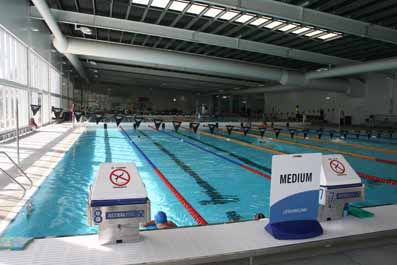 The City of Greater Geelong's aquatic, recreation and sport centres and their staff are now better equipped to save lives thanks to new automated external defibrillators.

Staff at the centres have been trained to use the defibrillators.

Explaining the introduction of the defibrillators, City of Greater Geelong Mayor John Mitchell stated "sudden Cardiac Arrest can strike anyone, at any age, at any time and in any place.

Mayor Mitchell added that the time between the onset of the heart attack and the first shock is the most important factor in deciding the outcome of Sudden Cardiac Arrest.

"With every minute that goes by, survival rates drop by up to 10%.

"Having automatic external defibrillators in our centres will allow first-aiders to respond with a life-saving shock within the first two to three critical minutes when survival is so much more likely."

Mayor Mitchell concluded that the defibrillators were designed to be simple to use and public first-aid courses include instruction in their use, saying "the defibrillators have been placed in locations where they can be quickly and efficiently used in case of Sudden Cardiac Arrest."