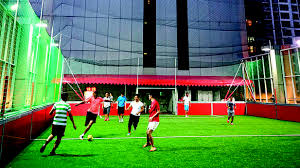 A new futsal venue, The View, is set to open on the rooftops of selected Singapore Housing and Development Board (HDB) apartment blocks.

The View Director Jeremy Goh, said it took two years of appeals before the idea was finally given the go ahead by HDB late last year.

Concerns over noise, safety and structural stability were some of the stumbling blocks for the deal but all outstanding issues have now been resolved.

The Ang Mo Kio, Bishan and Toa Payoh block in central Singapire will be the first six venues, with locations in the West of the city state next in line.

Courts will be made up of synthetic turf, like other popular futsal venues, with one or two courts atop per block.

The decision to erect floodlights, has not been finalised yet as the developers are still weighing the cost-effectiveness as well as the potential disturbance the bright lights might cause residents.

The cost of the project is being met by the developers of The View.

This latest futsal facility is the second to boast of an unusual location, after the Offside Futsal Park located under the Thomson Flyover, was opened earlier this year.

Speaking to Goal.com Singapore, Goh spoke of his enthusiasm and his relief at finally being able to launch the project, stating "it's been almost five years in the making, but I'm glad we're finally seeing it (happen).

"In that period of time we've seen quite a few new venues open, but I think we have something different, something that will definitely excite a lot of futsal players." 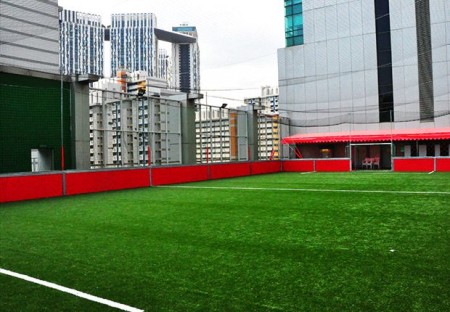 Goh is also quick to accept that winning over the residents could prove to be a difficult task but assured that all factors will be taken into consideration.

One possible concern over excessive noise has already been resolved.

The artificial turf is specially designed to absorb shock. Initially meant to minimise injuries, the feature also has an added bonus of being able to cancel out most sound waves and minimise vibrations, making it a very effective sound-proof material.

Safety is of paramount concern for the owners as well, with Goh explaining that "the entire area will be covered in net.

"That way the ball doesn't ever go out of the rooftop. Then we will have mid-body level railings installed around the perimeter."

Goh concludes "given the lack of land space in Singapore we could be seeing a lot more than futsal courts on rooftops in the future."