However, Auckland University of Technology are highlighting that more financial backing is needed to complete expansion of the facilities.

Located on Auckland's North Shore, the high performance centre at the AUT Millennium campus is touted as a world-class centre of excellence, but further funds are needed to realise the vision says Mike Stanley, AUT Millennium Trust Chief Executive and New Zealand Olympic Committee President explains "to date, we have been humbled by the response of those who have backed this project. "But we are still in fundraising mode and are seeking the support of others passionate about New Zealand's success and on creating an aspirational high performance culture of excellence where the focus is being exceptional."

Stanley adds "the redevelopment is a collaboration between public and private funders who share the vision of taking high performance sport in New Zealand to a new level."

Minister McCully said the Government's vision for high performance sport was to make New Zealand one of the most successful sporting nations in the world stating "this is really a team effort, and it's great to be able to share this occasion with many of the people and organisations who've also made contributions to make this redevelopment a reality. We're keen to work with private sector investors, with local government and with philanthropic funders who share that vision." 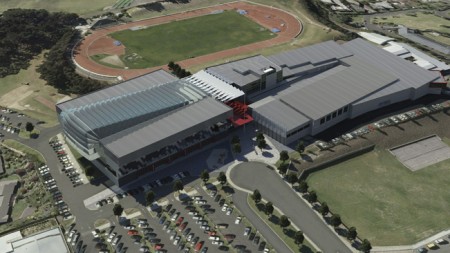 Vice Chancellor of AUT University Derek McCormack, says the partnership between AUT University and the Millennium Institute of Sport and Health will help drive the development of high performance sport in New Zealand through education, research and coaching.

"The new centre brings together the best of sports science research, coaching and management expertise. Work being conducted at AUT Millennium is of benefit not only to high performance athletes and coaches but also to community health and education. Our research will impact on the future health and performance of our nation, not just in sporting performance at the elite level, but at all dimensions of human potential."

Part of the developments include the establishment of a world centre of physical activity, nutrition, coaching and sports science which would deliver programmes in exercise, nutrition, lifestyle, resilience and leadership, helping to create healthier communities.

Developments at the high performance centre are due for completion by early 2012, in time for athletes who are preparing for the London Olympics.