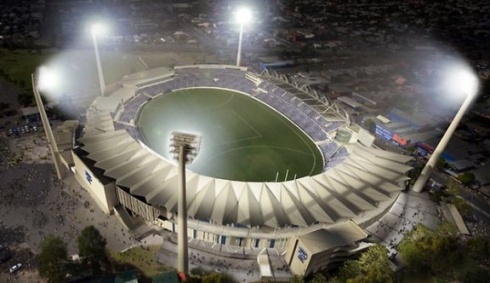 The Victorian Government is to provide $5 million to the Geelong Football Club to undertake the planning of the next stage of the redevelopment of Simonds Stadium - the former Kardinia Park.

Announcing that the funding will back the development of a full business case and detailed design work, Victorian Premier Denis Napthine stated "the Victorian ... Government wants to get the ball rolling on the redevelopment of the stadium which will include increased capacity and enhanced community facilities.

“Future stages of redevelopment could include replacement of the Brownlow, Jennings and Ford stands, as well as the Ablett Terrace and Southern Terrace. There will also be consideration given to constructing new and enhanced community and sporting facilities adjacent to Simonds Stadium.

“The redevelopment will potentially allow for Geelong to host an increased number of national and international events such as T20 Big Bash games, NRL games, A-league games and international-act concerts.

“As well as the great entertainment and excitement these types of events provide, they also generate local jobs and millions of dollars in economic benefits.

“A Deloitte study has found that each additional major event at Simonds Stadium, such as additional AFL games, injected $3 million into the local economy."

The $5 million in funding will allow the following work to begin immediately:

Victorian Sports Minister Damian Drum noted the positive effect such investments in sport have on the health of the broader community.

Minister Drum added "not only will this be a great economic driver for Geelong, but having world-class sporting facilities and world-class sporting events in Geelong will inspire generations of local children to be involved in sport and pursue healthy and active lifestyles."