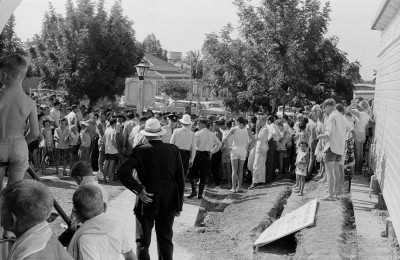 More than 100 former and current students and staff members from the University of Sydney are to re-enact the historic Freedom Ride in north western New South Wales.

Marking the 50th anniversary of the 1965 Freedom Ride will include some of the original riders, including Jim Spigelman, a former Chief Justice of the NSW Supreme Court and current Chair of the Australian Broadcasting Corporation.

The campaign that came to be known as the Freedom Ride was a major milestone in the civil rights of Aboriginal and Torres Straight Islander people in Australia. The original rides visited towns such as Walgett, Gulargambone, Kempsey, Bowraville and Moree, and highlighted the rampant racial segregation and discrimination against Indigenous Australians at the time.

While it may be hard to think of a swimming pool as being at the centre of social change, events at the Moree Baths became a key milestone in the recognition of indigenous rights.

In 1964, at the height of the civil rights campaign in the USA, a University of Sydney protest against racial segregation in the United States had led to the students being urged to look to their own backyard if they wanted to draw attention to racial discrimination. This led the students to focus their attention on entrenched racism and segregation that existed in country towns in New South Wales at that time.

The Freedom Ride planned to raise awareness of the poor state of Aboriginal health, education and housing; to help to lessen the socially discriminatory barriers which existed between Aboriginal and white residents; and to encourage and support Aboriginal people themselves to resist discrimination.

This led to the students demonstrating against racial discrimination practised at the Moree Baths (today known as the the Moree Artesian Aquatic Centre), the Kempsey Baths and the Walgett Returned Services League Club and Cinema. They not only challenged these practices, but they ensured that reports of their demonstrations and local townspeople's hostile responses were available for news broadcasts on radio and television. 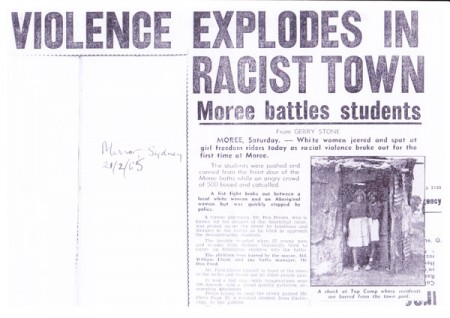 When the evening news broadcast the Vice-President of the Walgett RSL saying that he would never allow an Aboriginal to become a member into the living rooms of Australians, city viewers began to pressure State and Federal Governments for change.

At Moree, the students focused on the town baths where a Council by-law barred Aborigines, or persons "with an mixture of Aboriginal blood" from using the swimming pool.

Although the students were able to accompany Aboriginal youngsters from the reserve outside town into the pool, subject to the manager checking their ‘cleanliness’, the ban was reimposed once the students left. This led to the pool becoming a scene of tension and aggression when the students returned and attempted to assist Aboriginal children to enter the pool.

Backed by police, locals angrily defended the race-based ban which led to violence, arrests and The Freedom Riders being escorted out of town.

Although they did not return, The Freedom Riders protests were widely reported in newspapers across Australia, and around the world, and their campaigning led to change.

By May 1965, after legal advice that their ban was legally invalid, Moree Council scrapped the by-law that prevented Aborigines from using its pool

Images from 1965 show a confrontation at the Moree Artesian Aquatic Centre and a contemporary headline.

© Australasian Leisure Management. Not to be reproduced without permission.