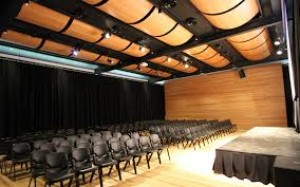 Set to be opened for the 2014 'Gathering the Four Winds' festival in April, the new 180-seat Windsong Pavilion is a purpose built, acoustically designed recital hall.

Since its creation in 1991, Four Winds Festival has presented world-class performances, virtuoso musicians, commissioned Australian music and world premiers at outdoor site at Barragga Bay, near Bermagui in NSW.

The Festival has also fostered strong community involvement through its year-long Inspiring and Festival Windsong programs. At the heart of the Four Winds philosophy is the belief that a culturally engaged community is a healthy and enriched community.

Visionary plans by the Four Winds Festival Board wanted more than just an outstanding biennial music festival. Conversations with local artists and cultural facilitators led to a groundswell of support which spawned financial investment from governments and private donors.

Recognising the significance of this capital development, the NSW Government's Arts Trade and Investment fund and the Federal Government (through the Regional Development Australia Fund) backed the project. With a total budget of $3.1 million, both Governments have been significant partners in the transformation of the site into a permanent and sophisticated arts centre.

The Windsong Pavilion was designed by architect Clinton Murray and, on completion, will be the only purpose built indoor recital hall in southeast NSW.

Looking forward to the completion of the new venue, said Four Winds' Chair Sheena Boughen stated "this is a big leap from a three-day festival to a world-class cultural facility that will support aspiring and practicing musicians in a year round calendar of events.

The Windson Pavilion is being equipped with state-of-the art technical infrastructure by Sydney's The P.A. People.

Given a brief to equip the facility for use as both a recital hall and a community resource, theatre systems consultant Jim Hultquist of global theatre design consultancy Schuler Shook specified a user-friendly AV system capable of accommodating a wide range of usage and configurations.

Brett Steele, Manager - Installed Systems at The P.A. People, oversaw the process of bringing the design to life. The technical solution provided delivers simplicity for the users with the use of some serious intelligence in the background.

Two JBL PRX512M 12" powered loudspeakers complemented by a PRX 518S subwoofer have been installed as the main Front of House P.A. system, driven from a BSS Blu DSP unit. The Blu has been programmed for both simple, no-operator sound reinforcement as well as connection to a mixing desk's outputs for larger musical events. Extensive wiring throughout The Pavilion enables equipment to be connected at many physical points, enabling multiple configurations for events. Radio microphones from Shure give the users the flexibility to move throughout the space.

A 3.500 lumen NEC projector has been installed to cover visual requirements, projecting onto a built-in screen. Both the projector and the sound system are controlled by an elegant user interface built with equipment from AMX.

For more information on the AV system at the Windsong Pavilion go to www.papeople.com.au