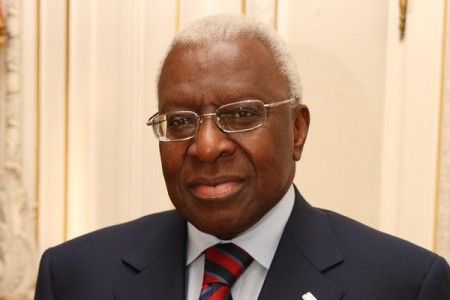 The IAAF's new President Lord Coe was questioned by French police on Tuesday, having offered to co-operate with athletics' world governing body says it is "fully co-operating" with inquiries.

It confirmed police had carried out searches and interviews at its Monaco headquarters.

WADA president Sir Craig Reedie told BBC Sport he was unable to comment on the Diack case until the publication of a report by an independent commission into the allegations of systemic doping.

However, the organisation did confirm that the French criminal investigation were a result of "information passed on" by its commission "to the relevant authorities".

WADA will publish the findings of its report into allegations of widespread doping on Monday, in Geneva.

The International Olympic Committee, of which Diack is an honorary member, said its ethics commission will also investigate the claims.

Diack ended his 16-year reign as IAAF President in August, when Briton Coe, a double Olympic 1500 metre winner, was elected as his replacement.

The IAAF has previously denied claims of widespread doping in the sport.

The French financial prosecutor's office said Diack and adviser Habib Cisse were arrested on Sunday and released on Tuesday, after being "interrogated" and put under investigation.

The IAAF's former anti-doping doctor Gabriel Dolle is also part of the investigation, according to AFP.

Last December, German broadcaster ARD/WDR alleged in a documentary there had been systematic doping in Russian athletics and implicated the IAAF in covering up the problem. The Russian Athletics Federation (RAF) said the allegations were "lies".

And in August, the Sunday Times and ARD/WDR said they had obtained data that exposed the "extraordinary extent of cheating" in the sport.

The IAAF and the WADA said it would investigate the claims at the time.

Speaking on the day of his election in August, 59-year-old Coe said suggestions his organisation were complicit in a doping scandal were "just inaccurate".

In its statement, the French financial prosecutor said: "Diack is suspected of receiving money in exchange for deferring sanctions for several Russian athletes who were found guilty of doping in 2011, ahead of the Olympic Games.

"Diack and Cisse were arrested on Sunday and released on Tuesday, after being interrogated by police officers and judges.

"They were presented to a judge on Tuesday who informed them that they had been put under a formal investigation. The investigation also continues into whether other persons were involved in suspected corruption."