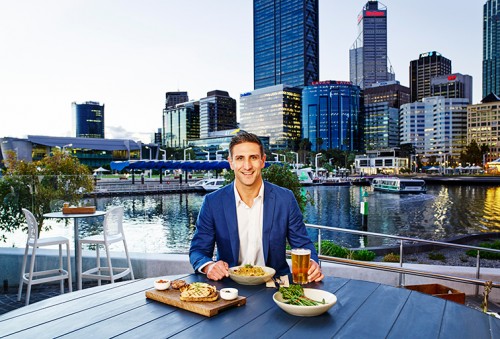 An advertising campaign promoting Perth and the new Perth Stadium to AFL fans will start airing on Foxtel this Sunday (11th June).

The promotion suggests that Pavlich is considering making a comeback to the game he loves in order to playing at the new 60,000-seat Perth Stadium, scheduled to open in early 2018.

A second commercial, also featuring Pavlich but focussing on Perth’s dining scene, will air on Foxtel and digital channels soon.

Explaining that the commercial was one of many marketing strategies to get AFL fans to come to Perth for games next season, Tourism WA Chief Executive Gwyn Dolphin stated “we simply never had enough seats at Domain Stadium to promote AFL travel to fans in other parts of Australia.

“From next season there will be 10,000 non-AFL member seats available at each Eagles and Dockers home game, which gives us a great opportunity to promote not only the stadium, but the city of Perth and travel to WA’s regional areas as well.

“Many AFL fans won’t know about the dramatic changes in Perth over the last few years and AFL at Perth Stadium provides us with the perfect opportunity to show them.

“We have other marketing activities in the pipeline that I expect to be able to announce at the end of the month.”

Former Fremantle Dockers Captain Pavlich, said he was really looking forward to the launch of Perth Stadium, adding “it’s going to be an amazing venue to play and watch footy.

“Having lived in WA for so long I’ve been lucky enough to experience so many of the amazing places and venues on offer here.

“I encourage people to make the journey West to catch a footy game at the new Stadium and experience everything Perth has on offer.

“It’s been great working with Tourism WA to showcase Perth and encourage AFL fans to visit our great state.”