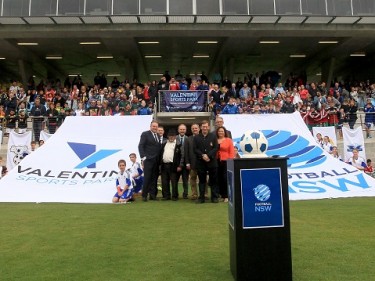 Signalling a new era for football in NSW, Football NSW’s redeveloped headquarters at Valentine Sports Park in Western Sydney has been officially opened.

Officially unveiled during Football NSW’s Skill Acquisition Program Gala Day on Saturday (21st March), the $22 million redevelopment has delivered a multi-purpose facility along with a modernised administrative base forFootball NSW.

The venue is also designed to service the sport and recreation needs of the local community, with netball, volleyball, handball and basketball already making use of the facilities, in addition to the swimming pool which houses learn to swim classes.

Football NSW Chief Executive Eddie Moore acknowledged the original founder of thehistoric facility, the late Charles Valentine and his forward thinking on giving the game such an invaluable investment.

Moore stated “this multi-million dollar Home of Football was all made possible thanks to the vision and generosity of Charles Valentine.

“It was really down to the hard work and determination of Charles that we find ourselves here today and able to celebrate the opening of this magnificent venue.

“I would also like to thank both the Federal and State Government for their financial contribution towards this exciting project.” 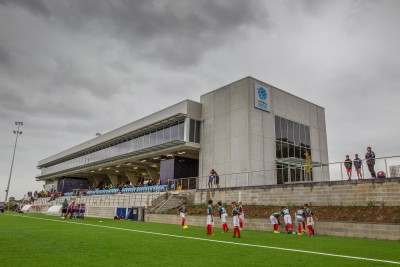 Gallop stated “there’s old cliché that says build it and they will come, but in our beautiful game the opposite actually applies.

“We already had the numbers, we needed the facilities and the game deserved something like Valentine Sports Park.

“A lot of hard work has gone in, a lot of people have pulled together as one to make sure that this facility came to fruition.

“Valentine Sports Park is going to be a birthplace for champions, but it’s also going to be a place where men and women, boys and girls can play the game for fun in a fantastic facility.”

Moore reiterated how fitting it was to see the launch coincide with SAP Gala Day, adding “it is fantastic that our official opening coincided with the SAP Gala Day, showcasing the young talent on display in NSW and highlighting a strong future for football in the state.

“The SAP program provides the foundation training for players aged U9 to U11 years that underpins the National Premier Leagues NSW Men’s and Women’s competitions and is consistent with the FFA National Curriculum.

“These state of the art facilities support the development of the game at all levels from grassroots through to the elite.

“Valentine Sports Park will become a hub for the football family, connecting the community through a modern facility.

“It is estimated over 200,000 people will pass through the venue every year and I envisage this to further grow in years to come.”

Valentine Park is well known for having hosted some of the biggest names in Australian football for the past 20 years.