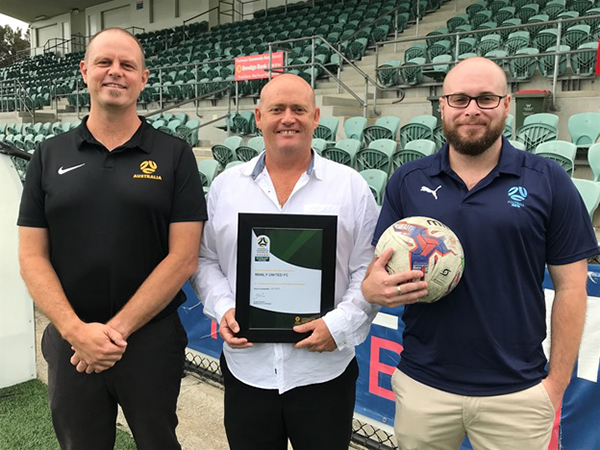 The National Club Development Program (NCDP) is alive and kicking as Football NSW was excited to see the likes of the Hills FA’s Kellyville Kolts as well as the Sutherland Shire Football Association and Manly United Football Club recognised as top performing clubs for the 2019 season.

The introduction of the National Club Development Program this year has provided community-based clubs with a tool to help them measure their development against national benchmarks as well as being recognised for their work and commitment.

“Football Federation Australia recognises that community-based football clubs play a key role in the development of football in Australia.

“To raise the overall standard of club administration and operations at all levels of the game, Football Federation Australia has established the National Club Development Program providing a clear model to develop and maintain a successful football club.

“Football NSW has been instrumental in engaging its member Associations and Clubs with the National Club Development Program and should be congratulated.

“I applaud the Kellyville Kolts Soccer Club, Sutherland Shire FA Representative Club and Manly United Football Club for their commitment to the development of their Clubs for the ultimate benefit of their members.”

“NCDP presents all levels of football, from clubs to Associations and Football NSW to FFA, with the opportunity to promote best practice.

“For parent bodies, we can use quantitative data to see where clubs need help and invest resources accordingly.

“This program will support volunteers to draw on best practice and expertise to develop their clubs. We see there being a terrific opportunity to develop all our clubs, whatever their current level of development – a rising tide lifts all boats.”

Proud Manly Warringah Football Association and Manly United Chief Executive David Mason was delighted with the news his club were awarded for their high standards delivered to its members this year.

“Part of our responsibility is to ensure that we provide a safe, inclusive and professional environment for our members and players and we are thrilled to have helped Football Federation Australia (FFA) and Football NSW develop and undertake the National Club Development Program.

“We are proud of the high standards we maintain at Manly United and we are honoured to have received a 5-star rating, which illustrates our Club and program is of the highest standard.

“We will now work with FFA, Football NSW and the grassroots clubs with the Manly Warringah Football Association to assist them through the program.”

Hills Football Chief Executive Kurt Johnson equally was impressed with his association’s display after being notified by the FFA in displaying its high-end status with the National Club Development Program.

“Hills Football thanks Jeremy and the team at the FFA and Football NSW for assisting in rolling this program out.

“We encourage all Hills Football clubs, and clubs across the country to take part and strive for 5 stars.

“This helps to add to the professionalism of our game that ultimately recruits and retains footballers for the long-term future.”

“Kellyville Kolts firmly believe that the National Club Development Program is a fantastic program, allowing clubs to establish a baseline to improve from, whilst comparing ourselves to best practice.

“This will assist many clubs to raise the overall standard of club administration.”

“We’re fully supportive of the National Club Development Program because it helps clubs to compare themselves to best practice, with a resource library to help them to develop their processes, procedures and policies.”

For more information on the NCDP please go to www.playfootball.com.au/ncdp/faq