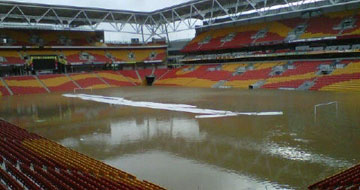 With floods having ravaged a major part of Queensland over recent weeks, rising floodwaters are now affecting low lying areas of the state capital Brisbane.

Brisbane, home to two million people, is experiencing its worst flooding since 1974 as water breaches the banks of the namesake river that runs through it.

With the human tragedy of the flooding being widely reported in mainstream media, Australasian Leisure Management is aware of the wide impact the flooding is having on leisure facilities and programs.

South Bank, the site of the 1988 World Expo, which is now home to a lagoon pool and the âWheel of Brisbaneâ as well as shops and restaurants has been inundated.

Within days of hosting the Brisbane International, the Queensland State Tennis Centre at Tennyson, is also under water, as is the Suncorp Stadium.

Venue managers Ogden IFC have issued a statement on the state of Suncorp Stadium (see Flood Impact Update on AEG Ogden Managed Venues - also posted today), advising that this Sunday's A-League match between Brisbane Roar and Wellington Phoenix is to be moved to another location.

Evacuation centre for flood-affected residents has also been established at the RNA Showgrounds and the QEII Stadium.

Floods across Queensland have had a major affect on tourism, an industry that generates about $4 billion in annual export earnings for the State. Losses from the floods may run into the hundreds of millions of dollars as travellers stay away even as key attractions such as the Whitsunday Islands and the Gold Coast  both of which have escaped relatively unscathed.

Queensland Tourism Industry Council Chief Executive Daniel Gscwhind states that "our greatest concern is the perception that Queensland is out of business and not a safe place to travel."

Gschwind also believes that operators may need financial and will need to be backed by new tourism marketing campaigns once waters recede.

David Beirman, a senior lecturer at University of Technology Sydney and author of 'Restoring Tourism Destinations in Crisis' adds that "the industry is going to take a very big hit because people around the world will remember these floods.

"There will be an impression that all of Queensland turned into a lake and that is the first perception they must address."

The floods are an added blow to an industry already battling an Australian dollar near record highs that is making it more expensive to visit while lowering the cost for locals to travel overseas.

Image: Suncorp Stadium has been flooded.