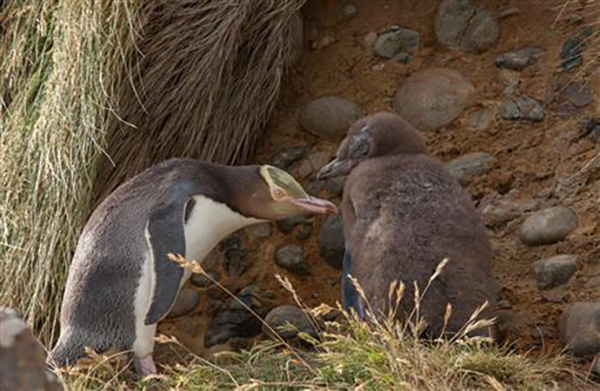 The New Zealand Government, iwi, NGOs and rehabilitation groups are working together to protect the nationally endangered hoiho/yellow-eyed penguin following a series of terrible breeding seasons.

New Zealand Minister of Conservation Eugenie Sage helped launch the Five Year Action Plan at the annual Yellow-Eyed Penguin symposium in Dunedin today stating “I am very pleased at the effort being put in for Hoiho conservation through the partnership between the Department of Conservation (DOC), Te Rūnanga o Ngāi Tahu, the Yellow-eyed Penguin Trust and Fisheries New Zealand.

“Te Kaweka Takohaka mō te Hoiho is a high-level strategy which aims to restore hoiho populations in the face of pressures from human activities at sea and on land.

“The strategy for hoiho is the first to follow this partnership approach. It underlines the importance of a united effort to protect and restore the populations of hoiho and other taonga species. I want to thank community groups for their huge efforts to help hoiho conservation.”

Priorities in the strategy and action plan focus on managing human activities and disturbance and reducing impacts in marine and terrestrial habitats.

The action plan Te Mahere Rima Tau involves stakeholders in the many actions required to support hoiho. It will be reviewed annually.

The draft Te Kaweka Takohaka mō te Hoiho was released for public comment in September 2019. The partners then revised the strategy and action plan to take account of feedback in submissions.

The Strategy will set the direction for halting the decline of hoiho on the Aotearoa/New Zealand mainland.

The strategy and action plan are available on the DOC website