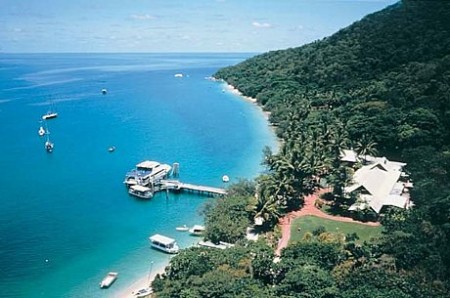 Fitzroy Island's recently revamped resort has been placed in receivership just five months after it opened.

The $100 million Hunt Resort, on Fitzroy Island in the Great Barrier Reef, was placed in the hands of receivers Ferrier Hodgson and administrators McLeod and Partners last week.

The ABC reported that the resort's owner, Joshua Hunt bought the resort from adventure tourism operator Raging Thunder for $18 million in 2006.

Fitzroy Island, with its famed Nudey Beach, was previously known as a favourite destination for backpackers and budget travellers. Since purchasing the resort, Hunt had taken the location upmarket, creating what he called a "mini-Hamilton Island" able to accommodate 450 people in a variety of hotels, suites and one- and two-bedroom apartments.

The resort had received its fair share of publicity since opening, hosting the contestants of reality TV series The Biggest Loser and offering 500 victims of the Victorian bushfires a week's free holiday.

In a further blow to the venture, the resort's generators broke down last Tuesday, forcing the evacuation of all guests. In a statement, Ferrier Hodgson said it would take the opportunity in the absence of guests to finishing outstanding infrastructure work on the island.

The work is estimated to take about one month and the resort will remain closed during this time. Guests who have booked and paid for accommodation during this period will be relocated to nearby Green Island, the statement said.