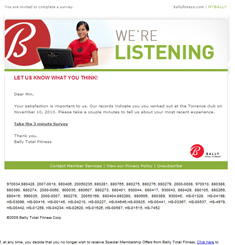 New information from the Fitness Industry Survey has revealed that fitness club members would prefer to receive an email from their club than any other form of communication.

The Survey recorded that 45% of fitness club members stated that email was their preferred communication channel with their club. With the next preferred method being an email newsletter, a combined total of 67% of members indicated that they prefer some form of email from their club.

However, clubs overwhelmingly prefer to communicate with members in person.

This information was given by nearly 20,000 fitness club members across Australia and New Zealand in the recent Fitness Industry Survey.

Commenting on the findings, Social Media Consultant and Impactiv8 Coach Loren Bartley explains "if used effectively, email can be perceived to be a more personal form of communication.

"Even when you are emailing out to your full database, you can still craft your email in such a way that the person receiving it feels like you are only writing to them, whereas it is obvious that is not the case when using the broadcast format of social media updates. But most importantly, if that is how your members prefer you to communicate with them, then you should give them what they want."

Ezypay Director of Sales, Marketing and Relationships Celeste Kirby-Brown believes "clubs are missing out on a big opportunity here.

"Email is a cheap and easy way to communicate with members and talking to members personally is just a waste of time and money - especially if they would prefer an email.

"Clubs need to be using a club management system like iconnect360 that allows you to communicate directly with members and stores the email history right there in the system. Clubs using iconnect360 can create email campaigns to prosects and also set up on going communication to members."

The Survey also reveals that 73% of former members of a fitness club would consider rejoining their former club, indicating considerable potential for clubs trying to win members back.

Survey shows that top four ways to do this:

1. Provide a no contract membership;

3. Offer then a no joining fee; or

4. Give them free personal training.

Kirby-Brown adds "clubs who have lists of ex-members should be trying to win them back.

"Sending ex-members emails with any of these four offers is a low cost and effective marketing strategy. They have told you how to win them back and also in what channel it really doesn't get better than that. "

Since 2008 Ezypay has been conducting the Fitness Industry Survey, surveying owners/managers and fitness club members across Australia and New Zealand.

The full member infograph can be viewed at http://bit.ly/168bTDe

2nd October 2011 - SMS GETS GREATER ‘CUT THROUGH’ THAN EMAILS