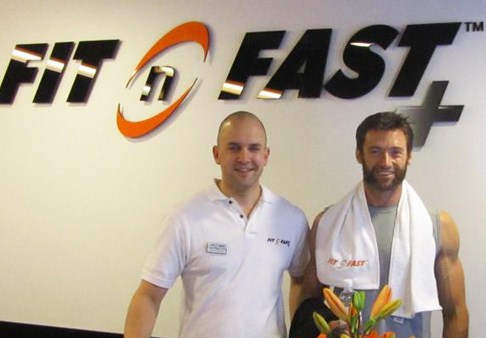 The Fit n Fast fitness club chain has revealed that actor Hugh Jackman is an investor in the business.

Jackman, who invested in the budget gym business founded by former Fitness First Australia Chief Executive Tony de Leede when it was established in 2010, has recently been a high profile attendee at the chain's new facility at Westfield Sydney.

Jackman has been pictured in the Sydney CBD gym, which opened in September, while the Fit n Fast Facebook pages features images of the Hollywood star in a Fit n Fast branded singlet.

A Fit n Fast spokesperson explains that Jackman is "passionate about fitness, and being involved in the Fit n Fast business."

The Hollywood star, a regular gym goer for over 20 years, is widely respected for the physical transformation and building of muscle mass that he underwent to star in the movie X-Men Origins: Wolverine.

His longstanding personal trainer, Mike Ryan explains Jackman's commitment to fitness, recalling "I was working as a trainer at the Physical Factory in 1989 when this young guy came to work just handing out the locker keys and towels.

"He was getting a hell of a lot of attention from the women in the place, and I thought, 'who does this bloke think he is?'. It turned out to be Hugh and we quickly became friends, and soon he asked me if Id show him how to train properly, because back then he was very, very skinny. We used to call him 'chicken legs'."

Today, Ryan refers to Jackman, who is now in his 40s, as "my masterpiece ... he just keeps getting better and better over the years. We've got a bet to see if we can both get to 50 and still have a six-pack!"