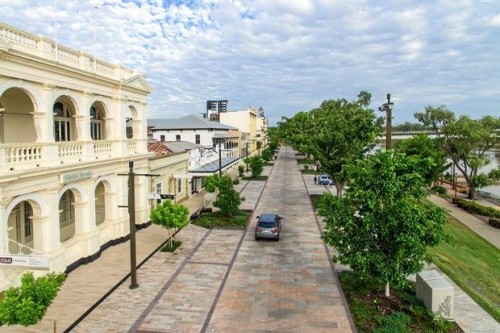 Rockhampton residents now have access to a new shared zone on the banks of the Fitzroy River following the recent completion and opening of the first stage of the Rockhampton Riverbank Revitalisation project.

The $36 million project - jointly funded by Rockhampton Regional Council, the Queensland Government and the Federal Government - aims to transform the upper and lower banks of Rockhampton’s historic Quay Street into a mixed-use space and recreational hub for people of all ages.

The first stage of the project has focused on the upper banks of the Riverfront precinct, transforming this area into a shared zone.

Located on the shores of the Fitzroy River and just a stone’s throw from Rockhampton’s commercial heart, the riverbank was previously an underutilised feature.

But with the incorporation of playground areas, river lookouts, shaded walkways and gathering spaces, the Precinct is set to become a vital part of Rockhampton’s lifestyle, and the site of regular events and festivals.

The project includes a new pier structure with a restaurant, water jet plaza, an aquatic play area, improved gardens and an amphitheatre along with curated public art and shaded seating with water misters.

Technology and new feature lighting is also being used to enhance the area of Quay Street between Fitzroy Street and William Street, which is renowned for having some of the region’s most impressive historic structures. 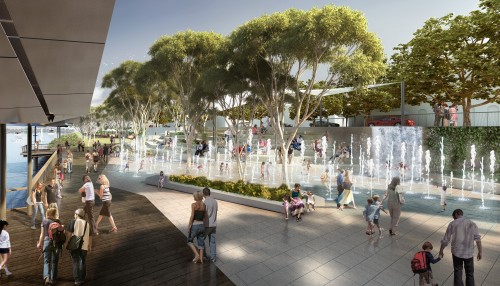 In addition to providing free public Wi-Fi for the riverfront, the plan involves the use of smart lighting and pole technologies - including digital signage and ‘Internet of Things’ sensors, such as on-street parking sensors and park/garden irrigation.

“The next exciting step will be the opening of the low bank in the New Year and we look forward to this entire project being completed so that our whole community can get the full benefit of the Riverbank.”

The Rockhampton region was hit hard by three major natural disasters in the current decade and the riverside has borne the brunt of this destruction.

Images show the completed first stage of the Rockhampton Riverbank Revitalisation project (top) and the concept for the project's soon to be completed aquatic play area (below).