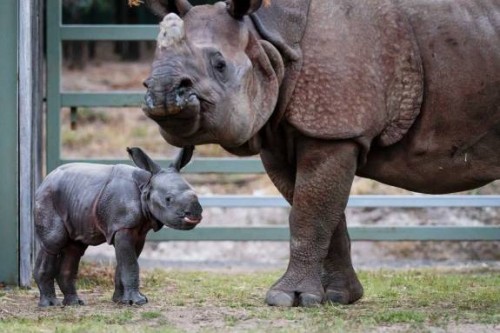 The first-ever greater one-horned rhinoceros calf born in Australia recently made its public debut at the Taronga Western Plains Zoo at Dubbo in central-west NSW.

‘Rajah the rhino’was born in October last year, but spent several months bonding with his mother out of the public eye.

The greater one-horned rhinoceros is classified as vulnerable on the International Union for Conservation of Nature (IUCN) Red List, and less than 2,700 of the animal remain in the wild.

Zookeeper Andrew Clow said Rajah was a natural when it came to interacting with visitors, stating “he is so brave and so adventurous, he comes straight out and up to new people, and he is not very scared of anything.

"Everything has gone a lot smoother than we expected. Each step of the training we have done with him, he’s done way ahead that what we thought he would do.

The Taronga Western Plains Zoo is the only facility in Australia to have a successful breeding programs for three different species of rhinoceros.

Zoo Director Matthew Fuller said this was a new era for research, telling the ABC “one of the things that we are very lucky with at Taronga Western Plains Zoo, is almost replicating wild environments and creating a situation where we give them the opportunity to spend that critical time together.

"Now that we can introduce them to the public, then that goes to the next phase of not only informing ourselves and the knowledge that we’re amassing around the species, but obviously informing our guests.

"We are very proud of the fact that our team is realised as some of the best in the world at this.

"This is synonymous with what we are doing with the rhinoceros, this is the next generation coming through and contributing to the global program."