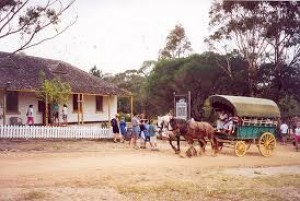 Crews from Fire and Rescue NSW and the Rural Fire Service (RFS) were called to the site at Somersby about 3.30am yesterday morning (Thursday 20th February) to tackle a blaze which, well alight when they arrived, took them nearly four hours to contain.

The main administration building of the former heritage attraction was destroyed by the fire, while other buildings were severely damaged.

Investigators have not ruled out arson as the cause of a fire, with RFS spokesman Joel Kursawe stating "once (we) begin our investigation we will be looking at all avenues."

The administration building is believed to have housed some old horse and carts and some old memorabilia that has been stored at the site since it closed in 2003.

Located next to the Australian Reptile Park, the heritage attraction sought to recreate the early years of European settlement in Sydney. Opened in 1975, it struggled in the highly competitive NSW attractions market prior to its closure.

A campaign to re-open the site has been active on social media, though questions have been raised about the economic viability of the venture.

A caretaker who was asleep at the site then the fire began was not injured.