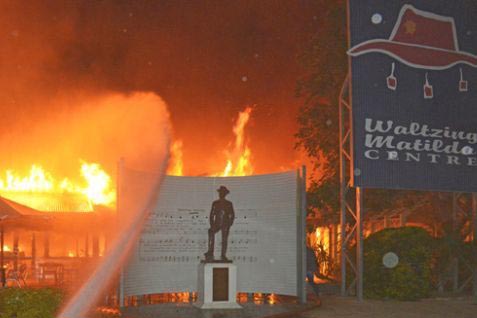 A fire has gutted the Waltzing Matilda Centre at Winton in Western Queensland.

Firefighters were called to the famous museum and tourist attraction last Thursday morning, with the building well alight when they arrived, with the gallery, kitchen and reception engulfed.

Two crews from Winton and one from Longreach, almost 200 kilometres away, attended the scene.

Inspector Bob Stooke from the Fire and Emergency Service said most of the building had been destroyed by fire, smoke or heat damage, although some artefacts and adjoining buildings were saved.

Inspector Stooke stated "I think it is devastating to the whole community of Winton, with the history of part of Australia."

The centre was built in 1998 after the centenary celebrations for the AB ‘Banjo’ Paterson's 1895 song and housed memorabilia and interactive displays.

Other Australian memorabilia is also held at the museum.

Winton Mayor Butch Lenton said the firefighters fought to save what they could, including a First World War exhibition.

Mayor Lenton told the ABC “with the Banjo Room with the war stuff in it, if that there has gone, well, that history will be gone that's for sure.

"Unfortunately it is a bit of a kick in the guts but we will tough it out and keep going with it.

"There have been no injuries and we are grateful for that, but unfortunately you lose a lot of history which you can't regather."