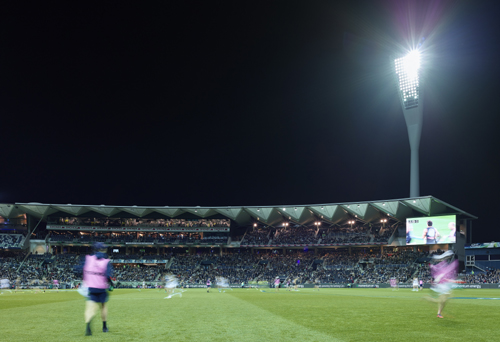 The fifth and final stage of the redevelopment of Geelong's Kardinia Park (GMHBA Stadium) redevelopment will cost $100 million to complete – the most expensive upgrade during the entire project.

A business plan comprising the plans for the works to the Ford Stand and Gary Ablett Terrace at Geelong FC’s home venue will be delivered to the Victorian Government early next year.

Geelong FC Chief Executive Brian Cook explained that the "business case (for the final stage of the venue) will be going to Government in the next four weeks and we're hoping that it will receive a positive answer from the State Government after that point in time.

"We're hoping that will be in the budget for next year. The cost is now about $100 million to finish off the stadium, so it is a huge job."

Cook emphasised that the Kardinia Park Stadium Trust rather than the AFL club was responsible for developing a business case to support the stage five expansion, which will have a heavy concentration on administration and facilities for cricket.

Cook added “the state government provided a $3.8 million grant to do a business case.

"While we (Geelong) were the ones who advocated and actually got the money, the money went to the Kardinia Park Stadium Trust.

"It's their role, they have been developing the business case in conjunction with state government's major events or capital works program."

With input from the Cats, the Kardinia Park Trust has taken over the key responsibility when it comes to the designing and roll out of stage five.

The final stage will bring the capacity of the stadium to 40,000 with cricket, which has been played at the ground at an international scale, to have a major presence.

Stage four, which encapsulated the major works done to the Charles Brownlow stand, was officially opened in May.