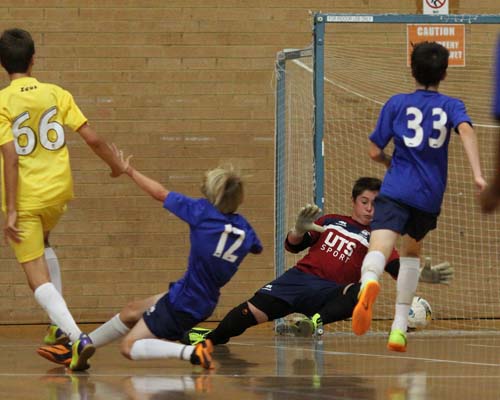 After several years during which multiple independent governing bodies have organised Futsal (5-a-side football) in Australia, Football Federation Australia (FFA) has announced a "renewed commitment" to the national development of the sport.

Following a recent National Futsal Forum held in Sydney under the auspices of FFA, FFA Chief Executive David Gallop has introduced a series of management changes to administer the game and pledged to deliver a long awaited national strategy for the sport.

In a feature on the FFA website, recently appointed FFA Head of Community Football Emma Highwood explained "our ambition is to plant the seeds that will lead to Australia growing into a world force in Futsal.

"FFA long ago identified Futsal as a growth area and a fantastic way to development football skills from a young age for boys and girls.

"The latest edition of the National Football Curriculum holds that Futsal and other small sided games as ideal ways to fast track the development of technical as well as the decision-making skills for all footballers.

"To get there, we need a specific Futsal coach education pathway from the Community to the elite levels. It goes without saying that with better Futsal coaches we will be able to produce better Futsal players.

"The recent successes of our Men’s National Futsal team, the Futsalroos, at AFC tournaments and the FIFA Futsal World Cup shows that we can be very competitive on the world stage.

"Our aim is that with further development and co-operation between all stakeholders, Australia could eventually become a world force in Futsal.

"As a show of intent, the National Futsal Forum involved representatives from the nine Member Federations, the Australian Sports Commission and key Futsal stakeholders.

"The length discussions and planning covered the following points:

• The role that Futsal can play in the development of talented players as demonstrated by leading Football nations, including Brazil

• The opportunity to continue to invest in the Talented Player Pathway, which includes the Australian Men’s National Futsal team, the Futsalroos, and growing the F-League (8-team interstate competition involving teams from NSW, ACT, VIC & QLD). This includes a greater focus on developing the female pathway, and the introduction of a Women’s National Futsal team over time

• Marketing and promotion of Futsal at all levels.

"The key outcome of National Futsal Forum is that FFA will now organise a National Working Group, which will include representatives from each stakeholder group."

FFA has also announced that Football NSW will host the annual FFA National Futsal Championships for the next three years with the 2015 edition of the FFA National Futsal Championships will be take place from 5th to 9th January across four venues: Valentine Sports Park (Open and AWD), Dural Sport and Leisure Centre (16 Years and Youth), Hawkesbury Indoor Stadium (12-15 Years) and Sydney Olympic Park Sports Centre (Finals).

Highwood adds, "Football NSW have demonstrated their commitment Futsal through the management of the F-League, which is starting to attract the most talented players from across Australia."

The FFA National Futsal Championships had previously been hosted by Capital Football for the past 26 years.

FFA thanked Capital Football for their commitment and leadership towards the growth and development of Futsal in Australia during their hosting of the tournament.