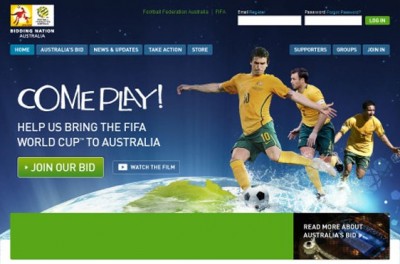 The Football Federation Australia (FFA) has dropped libel proceedings against publishers of a series of exposes on the conduct of its failed World Cup bid, as it stands accused of using the action to stop further bad headlines in the run up to last December's announcement of the hosts for the 2022 FIFA World Cup.

Under the terms of the agreement it is understood that the FFA will meet its own costs, estimated to be in the region of $30,000. The FFA refused to confirm these figures, saying that the terms of the settlement are confidential.

The development comes just days after the journalists who broke the series of scoops, Richard Baker and Nick McKenzie, were awarded the prestigious 'Sports Story of the Year' by the Melbourne Press Club. The judges said that their investigation "exposed ethical questions" about Australia's pursuit of the World Cup bid and "revealed questionable use of public money."

In their entry Baker and McKenzie said that the now-withdrawn legal action was "purely aimed at stopping our reporting in the lead up to the bid."

The pair said that "despite intense rhetoric" the FFA had not managed to find "a single falsehood" in its reporting and that the series "exemplified brave public interest reporting in the face of sustained pressure by the FFA and its chairman Frank Lowy."

The $46 million Australian bid was funded by the Australian Government.

The series of stories in The Age newspaper prompted investigations by FIFA and the Australian Government, as well as changes to World Cup bid rules.

In the stories, The Age made a series of allegations including:

• FIFA Executive committee members received inappropriate gifts and hospitality, including jewellery to a total value of A$50,000;
• The FFA covertly kept dual sets of accounts record-keeping for internal use and government reporting;
• That two of its international bid consultants stood to earn as much as a quarter of Australia's $46 million publicly funded bid budget;
• Australia's bid sought FIFA Executive committee influence by acceding to members' "personal and political demands".

The FFA denied the allegations, telling journalists from other outlets that they were "innuendo" based on "unsourced gossip and insinuations" with "no substance whatsoever"

Although the FFA were cleared by a Government investigation into allegations of accounting irregularities it now seems clear that they were unable to back up claims about the veracity of The Age's reporting in a courtroom.

In July last year, FIFA cleared the FFA of giving gifts to Executive committee members of an inappropriate value, but in light of allegations clarified bid guidelines so that FIFA's administration could keep better track of bid's lobbying efforts.