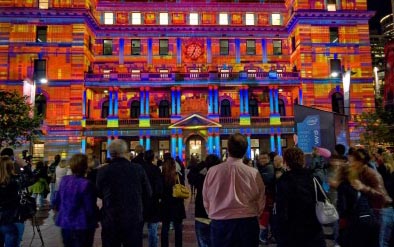 The City of Sydney is supporting three major cultural events aimed at attracting visitors and promoting Sydney as a leading events capital.

Lord Mayor Clover Moore said the City was working with the NSW Government to support festivals that attract almost a million local, interstate and international visitors to the city each year.

“Festivals like these, along with the City’s own major events program, ensure that Sydney retains its status as a globally competitive and innovative city with a thriving creative culture. They help attract visitors who spend money on accommodation, retail and visit other attractions during their stay.

“Our own events such as New Year’s Eve and Chinese New Year receive huge international coverage and each year attract many thousands of visitors to the city.

“These festivals inject tens of millions of dollars into the local economy each year, support small businesses and promote Sydney as an events capital on the world stage.”

VIVID Sydney is growing significantly in size and popularity each year, attracting huge international attention and Sydney Fringe Festival is fast becoming one of our largest arts and cultural events.

In 2014 VIVID Sydney will run for 18 days from 23rd May to 9th June and feature creative industry forums, outdoor exhibitions, contemporary music and brightly-coloured projections on Sydney’s landmark buildings. First launched in 2009, the event has grown exponentially and last year attracted more than 800,000 people.

Sydney Fringe Festival will present hundreds of shows in dozens of venues across Sydney for three weeks in September. Running since 2009, the festival attracted over 46,000 people last year.

The City spends more than $4.3 million each year in support of major events, including VIVID Sydney, Sydney Festival, the Sydney Writers’ Festival, the Biennale of Sydney and Sydney Film Festival.