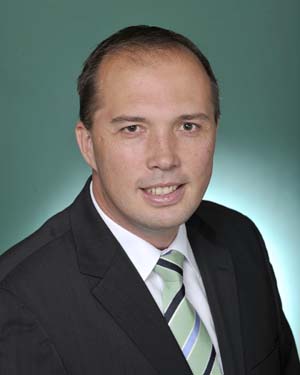 Sport industry stakeholders looking to learn about Federal Sport Minister Peter Dutton’s view and plans for his portfolio will have to wait until at least after the Federal budget, with the Minister having withdrawn from today’s Sports Without Borders conference in Melbourne.

While the conference has gone ahead successfully, Minister Dutton, who had been promoted as a keynote speaker, withdrew from the event, with Australian Sports Commission Chief Executive Simon Hollingsworth substituting at short notice.

Minister Dutton’s latest ‘no show’ at an industry conference, follows his withdrawl from presenting a keynote address at the Business of Sport Summit (BOSS) at the beginning of April.

For the BOSS event, the Minister cited the need to be in Perth for a meeting of the Federal Cabinet, although that meeting was held on the day prior to the BOSS.

Wiseman also advised that the Minister would be making no announcements on his sport portfolio until after the Federal budget on 13th May.

With the Federal Government’s influential Commission of Audit having this week recommended radical cuts to Federal Government expenditure, and budget cuts likely to extend to Medicare services, health funding issues, Minister Dutton’s other portfolio, appear set to be keep him in the public spotlight over the coming months.

However, the Federal Government’s funding of sport may well also be set for cuts – which could explain why Minister Dutton has been reluctant to speak about it.

As a result, seven month after coming into post, the Minister has made little contribution to Australia’s sporting landscape beyond attending a few major events, including the Australian Open and the opening ceremony of the Sochi Winter Olympics, and congratulating teams and athletes on significant achievements.

His most high profile involvement in policy matters came at the beginning of April when he failed to ensure that the Australian Sport Anti-Doping Authority’s Anti-Doping Rule Violation Panel had a full quorum of members.

This delayed Australian Sport Anti-Doping Authority’s current investigations into doping issues in AFL and NRL when the Panel was unable to address business it was scheduled to consider at the beginning of April because of a lack of members.

Minister Dutton’s failures are such that The Australian newspaper ran a news item on 17th April headlined 'Minister fiddles while sport burns' while comment in The Australian by Patrick Smith on 2nd May lamented “need a column on the great contribution the Sports Minister Peter Dutton has made to his portfolio since the Liberal government took power. Sports editor’s orders. Must obey.

“There now, that didn’t take long, did it? Sorry it is a bit long but the sport ed did say space wasn’t a problem.

“So we may have rambled on a bit. But reckon we captured his enormous input and influence as best we can.”

Last September, Prime Minister Tony Abbott’s decision to have sport represented at Cabinet level in his Government, along with the health portfolio, was widely acclaimed.

With several past Australian sports ministers having been dubbed 'minister for opening things' and 'minister for going to big events', many saw the linking of the portfolios as a major opportunity to link activity and recreation with a preventative health agenda.

However, it would appear that the Sport Minister has, at best, no agenda for his portfolio and, at worst, may take the Federal Government’s non-interventionist stance to a level that sees no input in backing sport and active lifestyles.

Note: A longstanding request by this publication for an interview with Minister Dutton about his responsibilities and views on activity, recreation and sport, for which written questions submitted, has not been actioned.

Click here to read Partick Smith's column from The Australian, 2nd May 2014