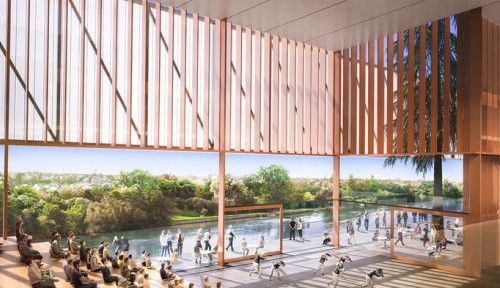 A comprehensive feasibility report for a new Waikato Regional Theatre has been presented to the Hamilton City Council, recommending a river-facing performing arts centre with flexible functionality.

Intended to replace Founders Theatre - closed for safety reasons in March 2016 - the design proposes an 1,100-seat theatre, shared public spaces and a public art gallery, to be located at the old Hamilton Hotel site on Victoria Street.

Dr Elder says the theatre is much more than a replacement for Founders Theatre. "We need a modern-day theatre and we’re lucky that modern-day theatre design offers so much scope. We’ve used every opportunity here to build a world-class theatre, the best possible for the broader Waikato region."

Following Hamilton City Council last year agreeing in principle to spend up to $30 million towards a new performing arts centre, Momentum Waikato and the Council commissioned Charcoalblue to run the process.

Dr Elder says the brief from the creative community was for a distinguished venue to attract the very best, and most inspiring world-class performing artists to the city, explaining “as a community, we want a catalyst for inspiration, and pathways into the creative sector. This theatre proposal meets all our needs and can do it in a way that makes it feel as though the space was specifically designed just for that purpose or genre." 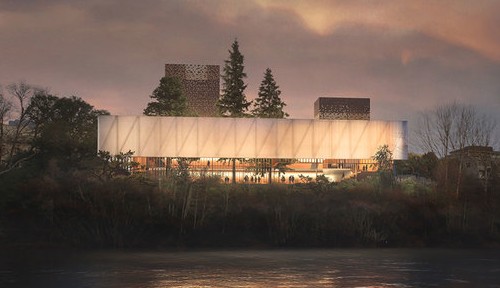 Dr Elder said that consultation made it clear that a new venue had to meet several challenges in order to satisfy everyone’s needs, adding “the consultation period brought out several continuing themes and perhaps the most compelling and inspirational pathway was found in the idea of a ‘creative precinct’, which opens the door to opportunity not just for the thousands of people in the Waikato’s theatrical community but the community as a whole." Dr Elder says the proposal is envisaged as enhancing the urban fabric of Hamilton and creating opportunities for the surrounding districts and towns.

Gardner says the project meets the needs of the city and region "by offering an exciting opportunity to create a new, vibrant, creative precinct for our city - one that will help transform the city centre and inspire the local and wider community".

The design of the new theatre
The new Waikato Regional Theatre has been designed as a top performing and visual arts hub that will co-exist with a proposed separate, privately developed lifestyle art hotel, public art gallery and retail space, allowing for shared spaces for meetings, conferences and events.

The cost of incorporating the hotel, gallery and retail spaces are not included in the Momentum Waikato recommendation, as these will be developed privately, but sharing facilities with these provides many synergies and economies of scale.

The theatre would be an energy efficient build and would be at the heart of a creative precinct with outdoor courtyards, a strong link between the theatre, the river and its environment, including the nearby Waikato Museum. It would have dual access from Embassy Park (home of the Riff-Raff statue) on one side and Sapper Moore-Jones Place (formerly Marlborough Place) on the other.

Gardner says the estimate to build the theatre is $72.9 million, and includes a 20% contingency, which he hopes is not necessary but says is sensible, given the high levels of uncertainty in the current construction market. 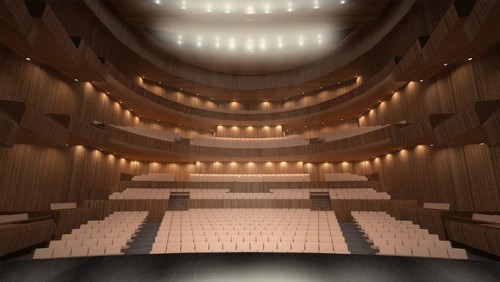 He says initial cost estimates covered only the delivery of a new theatre without the community spaces and river activation proposed in the new development. "This feasibility study provides a new future-proofed design for a true, high-end performing arts centre of a calibre that this region deserves," says Mr Gardner. "It’s multi-functional and we understand will be unique in Australasia."

Gardner says the building cost and specialist theatre fit-out costs are benchmarked against the recent ASB Waterfront Theatre project at Wynyard Quarter in Auckland’s CBD. The estimates include an extra $1.2 million for the deep pilings needed on the 5,395m2 site, which is common for all major CBD structures in Hamilton, whether located on the riverbank or elsewhere.

While work continues on the new theatre project, Momentum Waikato is to being the search for a new Chief Executive after current postholder Cheryl Reynolds announced that she will depart at the end of 2017.

Reynolds, who has been the founding Chief Executive of Momentum Waikato Community Foundation for the past four years, will be establishing a new social enterprise for generosity.