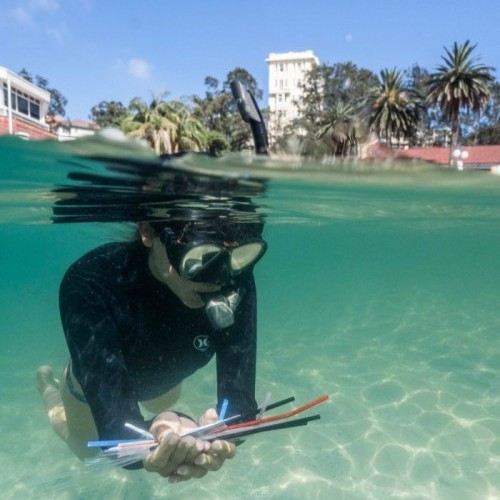 More than 30 tourism operators in Cairns and Port Douglas have signed-up to ban plastic straws at businesses within the Great Barrier Reef.

Founder of The Last Straw on the GBR, Nicole Nash, who is also a marine biologist, said plastic straws are ending up in the bellies of turtles and other marine life.

Nash explained "straws are something that people don't think twice about using.

"They just get one in their drink and don't think about the environmental impacts and the fact that the straw will outlive them."

Brian Hennessy from Sunlover Cruises in Cairns said his company has now banned plastic straws onboard their fleet of reef tour boats.

He advised "it's extremely important to us that we maintain the health of the reef.

"We thought that banning straws was a good practical step that we could do quite quickly, something that wouldn't be difficult to do but meant a lot to the health of the reef."

Australians use of single-use plastic items has grown massively in recent years and around 10 million straws are used each day.

Globally, at least 8 million tonnes of plastic are dumped into the ocean each year, where, when broken down, it enters the food chain and is responsible for the deaths of sea creatures.

In addition, according to a recent report, it is also killing coral.

Commenting on this, Dr Joleah Lamb from the ARC Centre of Excellence for Coral Reef Studies said a study of 159 coral reefs across the Asia-Pacific has found plastic is massively increasing the risk of disease in corals.

Dr Lamb told the ABC “corals that are in contact with plastic have an 89% likelihood of having disease, compared to just four per cent in the corals that didn't have plastic waste touching them.

"There's an estimated 11.1 billion pieces of plastic rubbish on the reefs in the (Asia-Pacific) area."

Nash sees these findings as further proof of the need for change, and plans for her campaign to extend beyond far north Queensland.

She concludes “this is just the first step. We're hoping to cover the entire Great Barrier Reef area and will be focussing on the Whitsundays next.”

Click here to read Billions of pieces of plastic on coral reefs send disease soaring, research reveals, as published in The Guardian Australia.