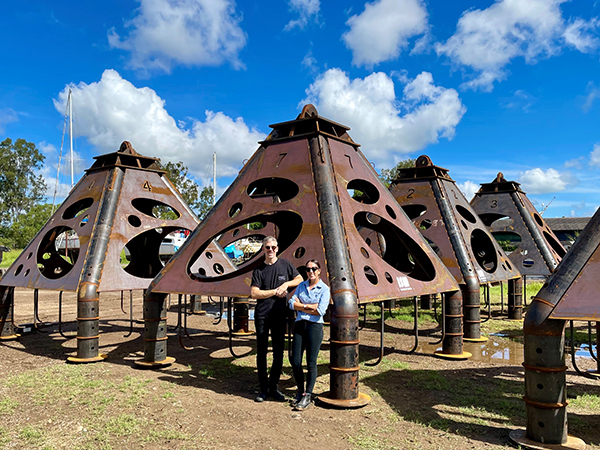 The Queensland Government has invested $2.5 million in the reef project and provided a 50-year lease over the seabed off Main Beach.

The reef foundations have been transported to Brisbane for final works before being barged to the coast for installation later this month.

The name - Wonder Reef – was endorsed after receiving more than 200 responses from the community.

Gold Coast Mayor Tom Tate advises “there was a lot of suggestions and I thank the community. We ultimately agreed with the name that external consultants had come up with, after the consultants liaised with the dive and tourism industries.

“Behind the scenes, we had to ensure the name was legally available and marketable so in that regard, I believe we have found the perfect fit.”

Mayor Tate added that with weather permitting, the reef foundations will be lowered into the water in coming weeks and that it is “vital that monitoring and safety checks were undertaken throughout 2021 while also allowing time for marine life to begin to inhabit the site before the site.

The attraction will officially open to the public in early 2022.

“This project will bring $32.8 million into the region’s economy in the first 10 years,’’ Mayor Tate said.

Environment and Great Barrier Reef Minister and Member for Gaven Meghan Scanlon said the project was a great addition to the coast’s long list of exciting attractions.

“The coast is renowned for its natural beauty and fun attractions. This project will combine these two perfectly.

“This project is expected to entice more than 16,000 diving enthusiasts to the Gold Coast and deliver an extra $2 million a year to the city’s visitor economy.’’

Depths range from 10 metres to 30 metres making it ideal for beginner and experienced divers.

The steel reef structures have been designed to attract and sustain a rich diversity of fish and other marine life and achieve positive environmental outcomes.

The $5 million dive attraction project, 2.5 kilometres offshore from Main Beach, is being delivered jointly by the Queensland Government and the City of Gold Coast. The State Government contribution is from the Growing Tourism Infrastructure Fund.