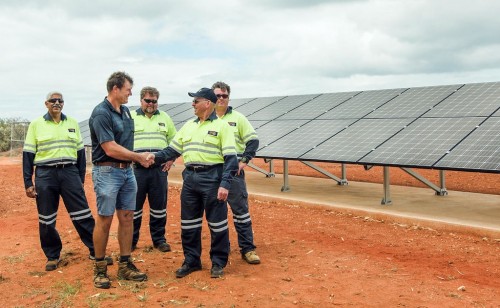 Exmouth Golf Club has gone ‘off the grid’ and become the site of the first standalone power system (SPS) in Western Australia’s north.

Launched last week, the independent electricity generator installed at the club will provide all the facility’s power from now on after its disconnection from the local mainstream electricity network.

Standalone power systems generate and store their own electricity 24 hours a day using solar power and battery storage, along with a back-up diesel generator, and are designed to be an alternative power source for people in remote regional areas.

Exmouth Golf Club President Neil Haywood said the system would be an asset for the facility, commenting “the system is ideal for our energy supply needs and the club’s members are really excited about the new technology.

“The SPS will also replace the powerlines and poles that service the club, enhancing the look of our facility and making it more attractive for members and visitors.”

Horizon Power began a stand-alone power systems project in response to properties ravaged by the Esperance bushfires in late 2015 and is now expanding their use across Western Australia.

“While SPS units are not connected to the network, our customers continue to receive the same high levels of reliability as those who are, and at no extra cost to the customer.”