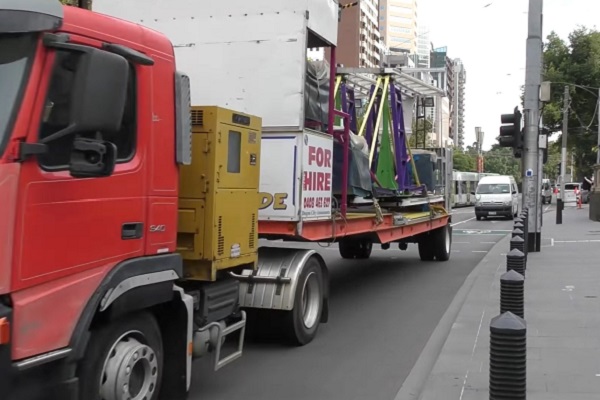 A group of Victorian event industry suppliers and carnival ride operators used their vehicles to encircle the Victorian Parliament building yesterday protesting at the lack of state government support for those involved in community events.

Organised by Damian De Jong of Action Events and linked with the Save Victorian Events campaign, 40 branded event vehicles drove around the Parliament House building with horns blaring expressing their frustration that the sector, set to be impacted by the end of the Federal Government’s JobKeeper allowance, has, unlike other industries impacted by the Coronavirus crisis, received no support from the Victorian Government.

Commenting on what drove the protest, De Jong advised “events make up over 20% of the Victorian economy but since the sector was shut down at the start of the Coronavirus we were not able to work for the rest of 2020 and have only had limited business this year.

“As events take months to plan, when JobKeeper finishes we face having to let even more of our staff go while many businesses may have to cease operations.”

Comparing support that other sectors have received from the Victorian Government, De Jong explained “the building sector has had additional support as have major events, but there is no understanding of the importance of the overall sector - community events, smaller shows, school fetes - and that when the event sector does revive it will be unable to do so without event suppliers.”

Citing widespread job losses across the sector, and likely further losses, De Jong pointed out that event industry expertise will be lost to Victoria, pointing out that in the aftermath of the Moomba Carnival mobile and ride operators had largely left the state to work on the Queensland and NSW show circuit.

“They need certainty that they can run events going forward, support and a voice.”

Inside Parliament House the state of the events industry was raised in both houses. In the Legislative Council (Upper House) the Victorian Government was asked to respond to email that event industry stakeholders had sent to their local members of parliament.

Each government member of the Upper House had been contacted by between 10 and 40 of their constituents from the event industry in the last few days, as part of the ongoing Save Victorian Events campaign

In the lower house, Victorian Minister for Tourism and Major Events Martin Pakula was asked by the Deputy Leader of the Liberal Party Cindy McLeish whether he would meet with those events businesses which have lost millions of dollars as a result of the government’s lockdowns and border closures.

In response, Minister Pakula advised “I could well hear the events sector circling the Parliament. “I think one of the things that they were demonstrating about was the impending end of JobKeeper” and going on to add “in regard to the events sector it has been badly affected by the absence of international visitors and not helped by the fact that they (the Federal Government) are now trying to send tourists to other parts of the country.

“The events sector has been terribly affected by the lack of international visitors. They have also been affected by the fact that business events that normally take place in person have been taking place online, and that is not something that is going to change in the near future.

“Having said that, the (Victorian) Government has been providing an enormous amount of support to the business event sector. We have paid more than 6,300 Coronavirus support payments to businesses in the events sector. 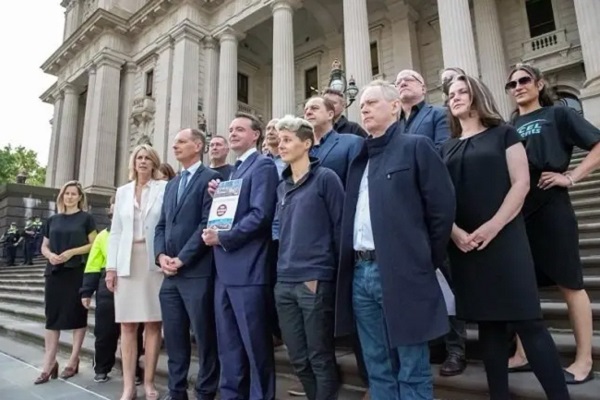 Venues also call for Victorian Government support
An open letter signed by more than 200 venue representatives calling for a “clear and balanced roadmap for easing restrictions and increasing venue capacities” has been delivered to the Victorian Government.

Coordinated by Save Our Scene and signed by representatives from prominent Victorian venues including The Espy, Corner Hotel, Northcote Social Club, Forum Theatre and The Tote, it calls on the Victorian Government to ease venue density restrictions in the hopes of securing more income to remain afloat.

The letter reads: “Following nine months of closure, Victoria’s live music venues recommenced operating in December 2020 with COVID safe capacity restrictions in place, based on a density quotient of 1 person per 2 metre².

“These restrictions mean our venues are operating at around 30% of their licensed capacity, resulting in a 70% drop in revenue whilst fixed costs including rent, insurance, utilities and staff remain static.”

The Victorian Government had previously introduced a $15 million Live Music Venues Program to support venues while restrictions were in place.

While two rounds of funding from this pool have since been distributed to businesses, signatories claim the funding did not go far enough.

The letter also makes the comparison to the various sporting events, such as the Australian Open, which have been allowed to proceed over the course of the pandemic.