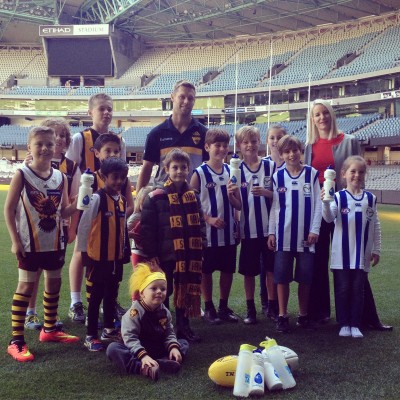 In a move to improve healthy choices and reduce the strain on fans’ hip pockets, Yarra Valley Water’s Choose Tap and VicHealth have joined forces with Etihad Stadium to supply free drinking water at all sporting fixtures and entertainment events at the venue.

The partnership has seen water refill stations installed on all three levels of Etihad Stadium, enabling fans to make the healthy choice to access water free of charge at any time throughout an event.

The initiative has been given the seal of approval by an AFL superstar, Sam Mitchell, Hawthorn’s champion midfielder.

The three time premiership player has urged fans to think about their health and hip pockets by choosing Etihad’s free chilled clean water.

Mitchell explains “people are quick to jump up if the price of petrol goes up but then they’re willing to purchase a not-so-cheap bottle of water.

“Here’s a chance to assist your health by avoiding sugary drinks and also to make a financial saving as well.”

Rechter stated “nearly two-thirds of Victorians are currently overweight or obese, and sugar sweetened beverages such as soft drinks, sports and energy drinks, and fruit drinks, which are the largest source of sugars in the Australian diet, are contributing to the problem.

Rechter also praised Etihad Stadium’s policy of allowing fans to bring their own healthy food from home, stating such a move enabled the patron to boost their health and balance their budget.

Yarra Valley Water Managing Director and Choose Tap spokesperson Pat McCafferty said that the Victorian Water industry was proud to be working with VicHealth and Etihad Stadium, to showcase some of the best drinking water in the world.

“The average price of one litre of bottled water is the same as 6,000 glasses from your tap.

“By installing new Choose Tap and VicHealth water refill stations at Etihad Stadium we can help families have a more affordable experience at the footy.

“The Choose Tap program encourages people to make informed choices about what they drink for the benefit of their health, hip pocket and the environment.”

Rechter added that VicHealth was pleased to be partnering with Etihad Stadium and Choose Tap to help make water accessible to everyone, stating “through VicHealth’s H30 Challenge, we’re encouraging Victorians to swap sugary drinks for water for 30 days and reduce their intake of excess kilojoules through sugary drinks.

“This three-year partnership will also allow us to collect vital information about people’s drinking water habits, and will help us to find out if availability of free water encourages people to choose water rather than sugary drinks, or if other factors play a role.”

Etihad Stadium Chief Executive Paul Sergeant said the introduction of refill stations was just one of a number of initiatives, the stadium in partnership with the AFL had introduced in 2015 to ‘engage with fans’ and to make their experience as enjoyable as possible when attending AFL fixtures.

Sergeant concluded “over a lengthy period we have taken note of a number of comments from fans and a trend was that they wanted the availability of free water.

“While AFL is played during the more temperate months, the requirement for hydration is very much a safety issue while sporting events such as cricket and soccer are played in the summer months.”

To sign up to VicHealth’s H30 Challenge go to www.h30challenge.com.au